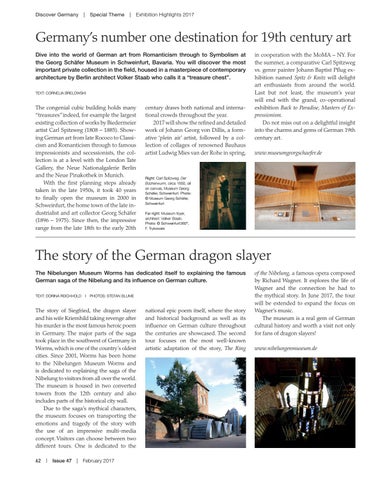 Germany’s number one destination for 19th century art Dive into the world of German art from Romanticism through to Symbolism at the Georg Schäfer Museum in Schweinfurt, Bavaria. You will discover the most important private collection in the field, housed in a masterpiece of contemporary architecture by Berlin architect Volker Staab who calls it a “treasure chest”. TEXT: CORNELIA BRELOWSKI

The congenial cubic building holds many “treasures” indeed, for example the largest existing collection of works by Biedermeier artist Carl Spitzweg (1808 – 1885). Showing German art from late Rococo to Classicism and Romanticism through to famous impressionists and secessionists, the collection is at a level with the London Tate Gallery, the Neue Nationalgalerie Berlin and the Neue Pinakothek in Munich. With the first planning steps already taken in the late 1950s, it took 40 years to finally open the museum in 2000 in Schweinfurt, the home town of the late industrialist and art collector Georg Schäfer (1896 – 1975). Since then, the impressive range from the late 18th to the early 20th

century draws both national and international crowds throughout the year. 2017 will show the refined and detailed work of Johann Georg von Dillis, a formative ‘plein air’ artist, followed by a collection of collages of renowned Bauhaus artist Ludwig Mies van der Rohe in spring,

in cooperation with the MoMA – NY. For the summer, a comparative Carl Spitzweg vs. genre painter Johann Baptist Pflug exhibition named Spitz &amp; Knitz will delight art enthusiasts from around the world. Last but not least, the museum’s year will end with the grand, co-operational exhibition Back to Paradise, Masters of Expressionism. Do not miss out on a delightful insight into the charms and gems of German 19th century art. www.museumgeorgschaefer.de

The story of the German dragon slayer The Nibelungen Museum Worms has dedicated itself to explaining the famous German saga of the Nibelung and its influence on German culture. TEXT: DORINA REICHHOLD  I  PHOTOS: STEFAN BLUME

The story of Siegfried, the dragon slayer and his wife Kriemhild taking revenge after his murder is the most famous heroic poem in Germany. The major parts of the saga took place in the southwest of Germany in Worms, which is one of the country´s oldest cities. Since 2001, Worms has been home to the Nibelungen Museum Worms and is dedicated to explaining the saga of the Nibelung to visitors from all over the world. The museum is housed in two converted towers from the 12th century and also includes parts of the historical city wall. Due to the saga’s mythical characters, the museum focuses on transporting the emotions and tragedy of the story with the use of an impressive multi-media concept. Visitors can choose between two different tours. One is dedicated to the 62  |  Issue 47  |  February 2017

national epic poem itself, where the story and historical background as well as its influence on German culture throughout the centuries are showcased. The second tour focuses on the most well-known artistic adaptation of the story, The Ring

of the Nibelung, a famous opera composed by Richard Wagner. It explores the life of Wagner and the connection he had to the mythical story. In June 2017, the tour will be extended to expand the focus on Wagner’s music. The museum is a real gem of German cultural history and worth a visit not only for fans of dragon slayers! www.nibelungenmuseum.de