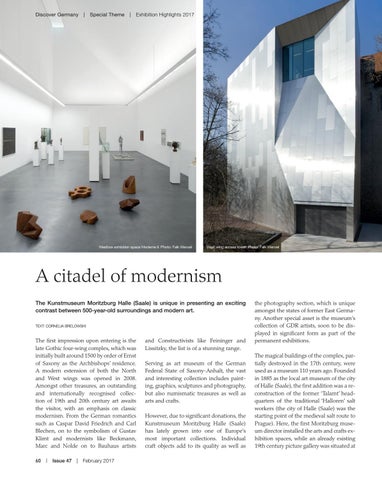 A citadel of modernism The Kunstmuseum Moritzburg Halle (Saale) is unique in presenting an exciting contrast between 500-year-old surroundings and modern art. TEXT: CORNELIA BRELOWSKI

The first impression upon entering is the late Gothic four-wing complex, which was initially built around 1500 by order of Ernst of Saxony as the Archbishops’ residence. A modern extension of both the North and West wings was opened in 2008. Amongst other treasures, an outstanding and internationally recognised collection of 19th and 20th century art awaits the visitor, with an emphasis on classic modernism. From the German romantics such as Caspar David Friedrich and Carl Blechen, on to the symbolism of Gustav Klimt and modernists like Beckmann, Marc and Nolde on to Bauhaus artists 60  |  Issue 47  |  February 2017

and Constructivists like Feininger and Lissitzky, the list is of a stunning range. Serving as art museum of the German Federal State of Saxony-Anhalt, the vast and interesting collection includes painting, graphics, sculptures and photography, but also numismatic treasures as well as arts and crafts. However, due to significant donations, the Kunstmuseum Moritzburg Halle (Saale) has lately grown into one of Europe’s most important collections. Individual craft objects add to its quality as well as

the photography section, which is unique amongst the states of former East Germany. Another special asset is the museum’s collection of GDR artists, soon to be displayed in significant form as part of the permanent exhibitions. The magical buildings of the complex, partially destroyed in the 17th century, were used as a museum 110 years ago. Founded in 1885 as the local art museum of the city of Halle (Saale), the first addition was a reconstruction of the former ‘Talamt’ headquarters of the traditional ‘Halloren’ salt workers (the city of Halle (Saale) was the starting point of the medieval salt route to Prague). Here, the first Moritzburg museum director installed the arts and crafts exhibition spaces, while an already existing 19th century picture gallery was situated at