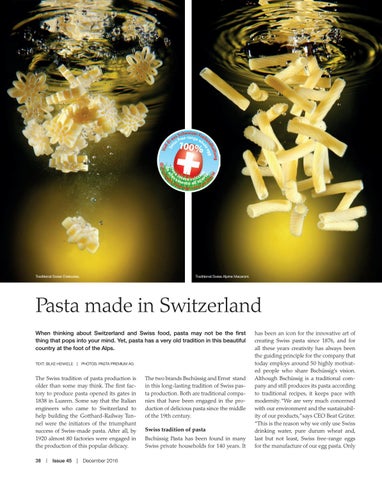 Pasta made in Switzerland When thinking about Switzerland and Swiss food, pasta may not be the first thing that pops into your mind. Yet, pasta has a very old tradition in this beautiful country at the foot of the Alps. TEXT: SILKE HENKELE  |  PHOTOS: PASTA PREMIUM AG

The Swiss tradition of pasta production is older than some may think. The first factory to produce pasta opened its gates in 1838 in Luzern. Some say that the Italian engineers who came to Switzerland to help building the Gotthard-Railway Tunnel were the initiators of the triumphant success of Swiss-made pasta. After all, by 1920 almost 80 factories were engaged in the production of this popular delicacy. 38  |  Issue 45  |  December 2016

The two brands Bschüssig and Ernst stand in this long-lasting tradition of Swiss pasta production. Both are traditional companies that have been engaged in the production of delicious pasta since the middle of the 19th century. Swiss tradition of pasta Bschüssig Pasta has been found in many Swiss private households for 140 years. It

has been an icon for the innovative art of creating Swiss pasta since 1876, and for all these years creativity has always been the guiding principle for the company that today employs around 50 highly motivated people who share Bschüssig’s vision. Although Bschüssig is a traditional company and still produces its pasta according to traditional recipes, it keeps pace with modernity. “We are very much concerned with our environment and the sustainability of our products,” says CEO Beat Grüter. “This is the reason why we only use Swiss drinking water, pure durum wheat and, last but not least, Swiss free-range eggs for the manufacture of our egg pasta. Only