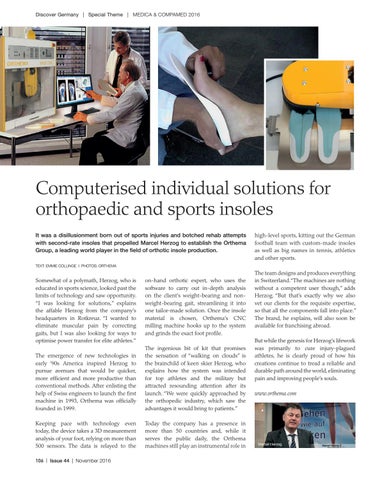 Computerised individual solutions for orthopaedic and sports insoles It was a disillusionment born out of sports injuries and botched rehab attempts with second-rate insoles that propelled Marcel Herzog to establish the Orthema Group, a leading world player in the field of orthotic insole production.

high-level sports, kitting out the German football team with custom-made insoles as well as big names in tennis, athletics and other sports.

Somewhat of a polymath, Herzog, who is educated in sports science, looked past the limits of technology and saw opportunity. “I was looking for solutions,” explains the affable Herzog from the company’s headquarters in Rotkreuz. “I wanted to eliminate muscular pain by correcting gaits, but I was also looking for ways to optimise power transfer for elite athletes.”

on-hand orthotic expert, who uses the software to carry out in-depth analysis on the client’s weight-bearing and nonweight-bearing gait, streamlining it into one tailor-made solution. Once the insole material is chosen, Orthema’s CNC milling machine hooks up to the system and grinds the exact foot profile.

The emergence of new technologies in early ‘90s America inspired Herzog to pursue avenues that would be quicker, more efficient and more productive than conventional methods. After enlisting the help of Swiss engineers to launch the first machine in 1993, Orthema was officially founded in 1999.

The ingenious bit of kit that promises the sensation of “walking on clouds” is the brainchild of keen skier Herzog, who explains how the system was intended for top athletes and the military but attracted resounding attention after its launch. “We were quickly approached by the orthopedic industry, which saw the advantages it would bring to patients.”

Keeping pace with technology even today, the device takes a 3D measurement analysis of your foot, relying on more than 500 sensors. The data is relayed to the

Today the company has a presence in more than 50 countries and, while it serves the public daily, the Orthema machines still play an instrumental role in

The team designs and produces everything in Switzerland.“The machines are nothing without a competent user though,” adds Herzog. “But that’s exactly why we also vet our clients for the requisite expertise, so that all the components fall into place.” The brand, he explains, will also soon be available for franchising abroad. But while the genesis for Herzog’s lifework was primarily to cure injury-plagued athletes, he is clearly proud of how his creations continue to tread a reliable and durable path around the world, eliminating pain and improving people’s souls. www.orthema.com