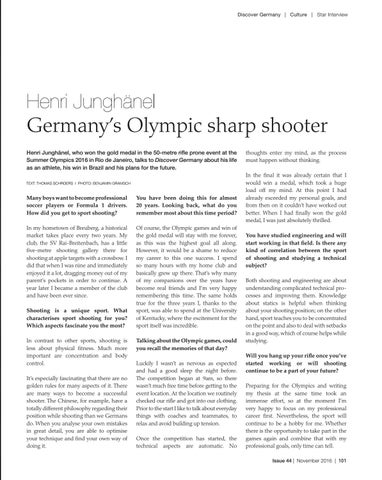 Henri Junghänel Germany’s Olympic sharp shooter Henri Junghänel, who won the gold medal in the 50-metre rifle prone event at the Summer Olympics 2016 in Rio de Janeiro, talks to Discover Germany about his life as an athlete, his win in Brazil and his plans for the future. TEXT: THOMAS SCHROERS I PHOTO: BENJAMIN GRAMSCH

Many boys want to become professional soccer players or Formula 1 drivers. How did you get to sport shooting?

You have been doing this for almost 20 years. Looking back, what do you remember most about this time period?

In my hometown of Breuberg, a historical market takes place every two years. My club, the SV Rai-Breitenbach, has a little five-metre shooting gallery there for shooting at apple targets with a crossbow. I did that when I was nine and immediately enjoyed it a lot, dragging money out of my parent’s pockets in order to continue. A year later I became a member of the club and have been ever since.

Of course, the Olympic games and win of the gold medal will stay with me forever, as this was the highest goal all along. However, it would be a shame to reduce my career to this one success. I spend so many hours with my home club and basically grew up there. That’s why many of my companions over the years have become real friends and I’m very happy remembering this time. The same holds true for the three years I, thanks to the sport, was able to spend at the University of Kentucky, where the excitement for the sport itself was incredible.

Shooting is a unique sport. What characterises sport shooting for you? Which aspects fascinate you the most? In contrast to other sports, shooting is less about physical fitness. Much more important are concentration and body control. It’s especially fascinating that there are no golden rules for many aspects of it. There are many ways to become a successful shooter. The Chinese, for example, have a totally different philosophy regarding their position while shooting than we Germans do. When you analyse your own mistakes in great detail, you are able to optimise your technique and find your own way of doing it.

Talking about the Olympic games, could you recall the memories of that day? Luckily I wasn’t as nervous as expected and had a good sleep the night before. The competition began at 9am, so there wasn’t much free time before getting to the event location. At the location we routinely checked our rifle and got into our clothing. Prior to the start I like to talk about everyday things with coaches and teammates, to relax and avoid building up tension. Once the competition has started, the technical aspects are automatic. No

thoughts enter my mind, as the process must happen without thinking. In the final it was already certain that I would win a medal, which took a huge load off my mind. At this point I had already exceeded my personal goals, and from then on it couldn’t have worked out better. When I had finally won the gold medal, I was just absolutely thrilled. You have studied engineering and will start working in that field. Is there any kind of correlation between the sport of shooting and studying a technical subject? Both shooting and engineering are about understanding complicated technical processes and improving them. Knowledge about statics is helpful when thinking about your shooting position; on the other hand, sport teaches you to be concentrated on the point and also to deal with setbacks in a good way, which of course helps while studying. Will you hang up your rifle once you’ve started working or will shooting continue to be a part of your future? Preparing for the Olympics and writing my thesis at the same time took an immense effort, so at the moment I’m very happy to focus on my professional career first. Nevertheless, the sport will continue to be a hobby for me. Whether there is the opportunity to take part in the games again and combine that with my professional goals, only time can tell. Issue 44 | November 2016 | 101