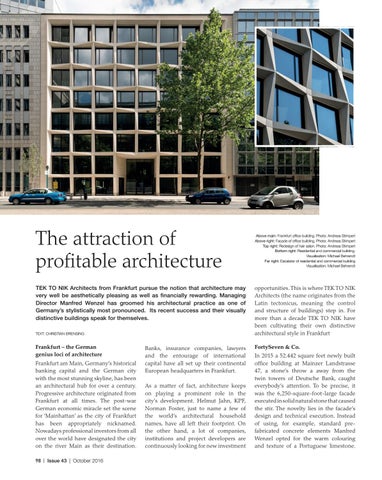 The attraction of profitable architecture TEK TO NIK Architects from Frankfurt pursue the notion that architecture may very well be aesthetically pleasing as well as financially rewarding. Managing Director Manfred Wenzel has groomed his architectural practice as one of Germany’s stylistically most pronounced. Its recent success and their visually distinctive buildings speak for themselves. TEXT: CHRISTIAN BRENSING

Frankfurt – the German genius loci of architecture Frankfurt am Main, Germany’s historical banking capital and the German city with the most stunning skyline, has been an architectural hub for over a century. Progressive architecture originated from Frankfurt at all times. The post-war German economic miracle set the scene for ‘Mainhattan’ as the city of Frankfurt has been appropriately nicknamed. Nowadays professional investors from all over the world have designated the city on the river Main as their destination. 98 | Issue 43 | October 2016

Banks, insurance companies, lawyers and the entourage of international capital have all set up their continental European headquarters in Frankfurt. As a matter of fact, architecture keeps on playing a prominent role in the city’s development. Helmut Jahn, KPF, Norman Foster, just to name a few of the world’s architectural household names, have all left their footprint. On the other hand, a lot of companies, institutions and project developers are continuously looking for new investment

opportunities. This is where TEK TO NIK Architects (the name originates from the Latin tectonicus, meaning the control and structure of buildings) step in. For more than a decade TEK TO NIK have been cultivating their own distinctive architectural style in Frankfurt FortySeven &amp; Co. In 2015 a 52.442 square feet newly built office building at Mainzer Landstrasse 47, a stone’s throw a away from the twin towers of Deutsche Bank, caught everybody’s attention. To be precise, it was the 6,250-square-foot-large facade executed in solid natural stone that caused the stir. The novelty lies in the facade’s design and technical execution. Instead of using, for example, standard prefabricated concrete elements Manfred Wenzel opted for the warm colouring and texture of a Portuguese limestone.