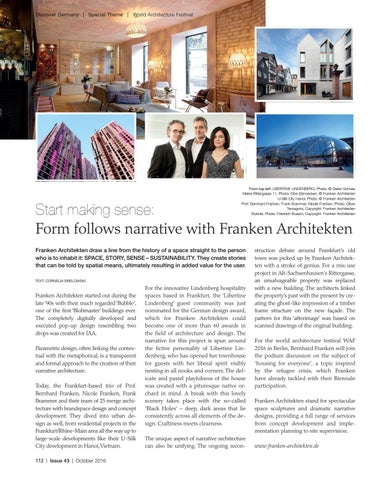 Start making sense: Form follows narrative with Franken Architekten Franken Architekten draw a line from the history of a space straight to the person who is to inhabit it: SPACE, STORY, SENSE – SUSTAINABILITY. They create stories that can be told by spatial means, ultimately resulting in added value for the user. TEXT: CORNELIA BRELOWSKI

Franken Architekten started out during the late ‘90s with their much regarded ‘Bubble’, one of the first ‘Blobmaster’ buildings ever. The completely digitally developed and executed pop-up design resembling two drops was created for IAA. Parametric design, often linking the contextual with the metaphorical, is a transparent and formal approach to the creation of their narrative architecture. Today, the Frankfurt-based trio of Prof. Bernhard Franken, Nicole Franken, Frank Brammer and their team of 25 merge architecture with brandspace design and concept development. They dived into urban design as well, from residential projects in the Frankfurt/Rhine-Main area all the way up to large-scale developments like their U-Silk City development in Hanoi, Vietnam. 112 | Issue 43 | October 2016

For the innovative Lindenberg hospitality spaces based in Frankfurt, the ‘Libertine Lindenberg’ guest community was just nominated for the German design award, which for Franken Architekten could become one of more than 60 awards in the field of architecture and design. The narrative for this project is spun around the fictive personality of Libertine Lindenberg, who has opened her townhouse for guests with her liberal spirit visibly nesting in all nooks and corners. The delicate and pastel playfulness of the house was created with a pituresque native orchard in mind. A break with this lovely scenery takes place with the so-called ‘Black Holes‘ – deep, dark areas that lie consistently across all elements of the design. Craftiness meets clearness. The unique aspect of narrative architecture can also be unifying. The ongoing recon-

struction debate around Frankfurt’s old town was picked up by Franken Architekten with a stroke of genius. For a mix-use project in Alt-Sachsenhausen’s Rittergasse, an unsalvageable property was replaced with a new building. The architects linked the property’s past with the present by creating the ghost-like impression of a timber frame structure on the new façade. The pattern for this ‘afterimage’ was based on scanned drawings of the original building. For the world architecture festival WAF 2016 in Berlin, Bernhard Franken will join the podium discussion on the subject of ‘housing for everyone’, a topic inspired by the refugee crisis, which Franken have already tackled with their Biennale participation. Franken Architekten stand for spectacular space sculptures and dramatic narrative designs, providing a full range of services from concept development and implementation planning to site supervision. www.franken-architekten.de