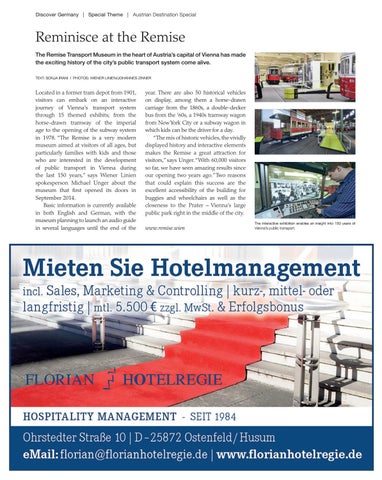 Reminisce at the Remise The Remise Transport Museum in the heart of Austria’s capital of Vienna has made the exciting history of the city’s public transport system come alive. TEXT: SONJA IRANI I PHOTOS: WIENER LINIEN/JOHANNES ZINNER

Located in a former tram depot from 1901, visitors can embark on an interactive journey of Vienna’s transport system through 15 themed exhibits; from the horse-drawn tramway of the imperial age to the opening of the subway system in 1978. “The Remise is a very modern museum aimed at visitors of all ages, but particularly families with kids and those who are interested in the development of public transport in Vienna during the last 150 years,” says Wiener Linien spokesperson Michael Unger about the museum that first opened its doors in September 2014. Basic information is currently available in both English and German, with the museum planning to launch an audio guide in several languages until the end of the

year. There are also 50 historical vehicles on display, among them a horse-drawn carriage from the 1860s, a double-decker bus from the ’60s, a 1940s tramway wagon from New York City or a subway wagon in which kids can be the driver for a day. “The mix of historic vehicles, the vividly displayed history and interactive elements makes the Remise a great attraction for visitors,” says Unger. “With 60,000 visitors so far, we have seen amazing results since our opening two years ago.” Two reasons that could explain this success are the excellent accessibility of the building for buggies and wheelchairs as well as the closeness to the Prater – Vienna’s large public park right in the middle of the city. www.remise.wien

The interactive exhibition enables an insight into 150 years of Vienna’s public transport.