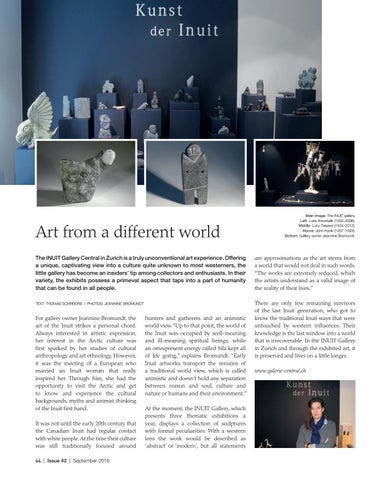 Art from a different world

The INUIT Gallery Central in Zurich is a truly unconventional art experience. Offering a unique, captivating view into a culture quite unknown to most westerners, the little gallery has become an insiders’ tip among collectors and enthusiasts. In their variety, the exhibits possess a primeval aspect that taps into a part of humanity that can be found in all people.

are approximations as the art stems from a world that would not deal in such words. “The works are extremely reduced, which the artists understand as a valid image of the reality of their lives.”

There are only few remaining survivors of the last Inuit generation, who got to know the traditional Inuit ways that were untouched by western influences. Their knowledge is the last window into a world that is irrecoverable. In the INUIT Gallery in Zurich and through the exhibited art, it is preserved and lives on a little longer.

For gallery owner Jeannine Bromundt, the art of the Inuit strikes a personal chord. Always interested in artistic expression, her interest in the Arctic culture was first sparked by her studies of cultural anthropology and art ethnology. However, it was the meeting of a European who married an Inuit woman that really inspired her. Through him, she had the opportunity to visit the Arctic and get to know and experience the cultural backgrounds, myths and animist thinking of the Inuit first hand. It was not until the early 20th century that the Canadian Inuit had regular contact with white people. At the time their culture was still traditionally focused around 44 | Issue 42 | September 2016

hunters and gatherers and an animistic world view.“Up to that point, the world of the Inuit was occupied by well-meaning and ill-meaning spiritual beings, while an omnipresent energy called Sila kept all of life going,” explains Bromundt. “Early Inuit artworks transport the remains of a traditional world view, which is called animistic and doesn’t hold any separation between reason and soul, culture and nature or humans and their environment.” At the moment, the INUIT Gallery, which presents three thematic exhibitions a year, displays a collection of sculptures with formal peculiarities. With a western lens the work would be described as ‘abstract’ or ‘modern’, but all statements