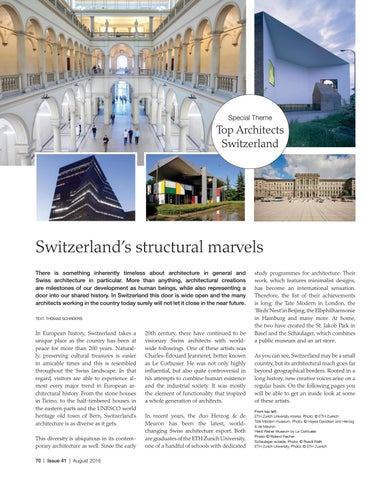 Switzerland’s structural marvels There is something inherently timeless about architecture in general and Swiss architecture in particular. More than anything, architectural creations are milestones of our development as human beings, while also representing a door into our shared history. In Switzerland this door is wide open and the many architects working in the country today surely will not let it close in the near future. TEXT: THOMAS SCHROERS

In European history, Switzerland takes a unique place as the country has been at peace for more than 200 years. Naturally, preserving cultural treasures is easier in amicable times and this is resembled throughout the Swiss landscape. In that regard, visitors are able to experience almost every major trend in European architectural history. From the stone houses in Ticino, to the half-timbered houses in the eastern parts and the UNESCO world heritage old town of Bern, Switzerland’s architecture is as diverse as it gets. This diversity is ubiquitous in its contemporary architecture as well. Since the early 70 | Issue 41 | August 2016

20th century, there have continued to be visionary Swiss architects with worldwide followings. One of these artists was Charles-Édouard Jeanneret, better known as Le Corbusier. He was not only highly influential, but also quite controversial in his attempts to combine human existence and the industrial society. It was mostly the element of functionality that inspired a whole generation of architects. In recent years, the duo Herzog &amp; de Meuron has been the latest, worldchanging Swiss architecture export. Both are graduates of the ETH Zurich University, one of a handful of schools with dedicated

study programmes for architecture. Their work, which features minimalist designs, has become an international sensation. Therefore, the list of their achievements is long: the Tate Modern in London, the ‘Birds’Nest’in Beijing, the Elbphilharmonie in Hamburg and many more. At home, the two have created the St. Jakob Park in Basel and the Schaulager, which combines a public museum and an art store. As you can see, Switzerland may be a small country, but its architectural reach goes far beyond geographical borders. Rooted in a long history, new creative voices arise on a regular basis. On the following pages you will be able to get an inside look at some of these artists. From top left: ETH Zurich University interior. Photo: © ETH Zuerich Tate Modern museum. Photo: © Hayes Davidson and Herzog &amp; de Meuron Heidi Weber Museum by Le Corbusier. Photo: © Roland Fischer Schaulager outside. Photo: © Ruedi Walti ETH Zurich University. Photo: © ETH Zuerich