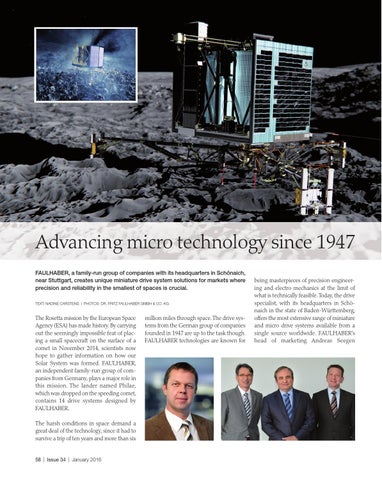 Advancing micro technology since 1947 FAULHABER, a family-run group of companies with its headquarters in Schönaich, near Stuttgart, creates unique miniature drive system solutions for markets where precision and reliability in the smallest of spaces is crucial. TEXT: NADINE CARSTENS I PHOTOS: DR. FRITZ FAULHABER GMBH &amp; CO. KG

The Rosetta mission by the European Space Agency (ESA) has made history. By carrying out the seemingly impossible feat of placing a small spacecraft on the surface of a comet in November 2014, scientists now hope to gather information on how our Solar System was formed. FAULHABER, an independent family-run group of companies from Germany, plays a major role in this mission. The lander named Philae, which was dropped on the speeding comet, contains 14 drive systems designed by FAULHABER. The harsh conditions in space demand a great deal of the technology, since it had to survive a trip of ten years and more than six

million miles through space. The drive systems from the German group of companies founded in 1947 are up to the task though. FAULHABER technologies are known for

being masterpieces of precision engineering and electro mechanics at the limit of what is technically feasible.Today, the drive specialist, with its headquarters in Schönaich in the state of Baden-Württemberg, offers the most extensive range of miniature and micro drive systems available from a single source worldwide. FAULHABER’s head of marketing Andreas Seegen