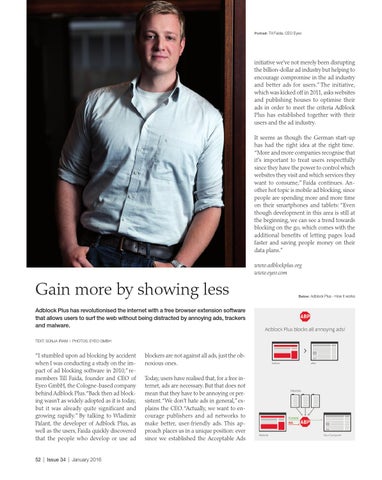 initiative we’ve not merely been disrupting the billion-dollar ad industry but helping to encourage compromise in the ad industry and better ads for users.” The initiative, which was kicked off in 2011, asks websites and publishing houses to optimise their ads in order to meet the criteria Adblock Plus has established together with their users and the ad industry. It seems as though the German start-up has had the right idea at the right time. “More and more companies recognise that it’s important to treat users respectfully since they have the power to control which websites they visit and which services they want to consume,” Faida continues. Another hot topic is mobile ad blocking, since people are spending more and more time on their smartphones and tablets: “Even though development in this area is still at the beginning, we can see a trend towards blocking on the go, which comes with the additional benefits of letting pages load faster and saving people money on their data plans.” www.adblockplus.org www.eyeo.com

Gain more by showing less Adblock Plus has revolutionised the internet with a free browser extension software that allows users to surf the web without being distracted by annoying ads, trackers and malware. TEXT: SONJA IRANI | PHOTOS: EYEO GMBH

“I stumbled upon ad blocking by accident when I was conducting a study on the impact of ad blocking software in 2010,” remembers Till Faida, founder and CEO of Eyeo GmbH, the Cologne-based company behind Adblock Plus.“Back then ad blocking wasn’t as widely adopted as it is today, but it was already quite significant and growing rapidly.” By talking to Wladimir Palant, the developer of Adblock Plus, as well as the users, Faida quickly discovered that the people who develop or use ad

blockers are not against all ads, just the obnoxious ones. Today, users have realised that, for a free internet, ads are necessary. But that does not mean that they have to be annoying or persistent.“We don’t hate ads in general,”explains the CEO.“Actually, we want to encourage publishers and ad networks to make better, user-friendly ads. This approach places us in a unique position: ever since we established the Acceptable Ads

Below: Adblock Plus - How it works