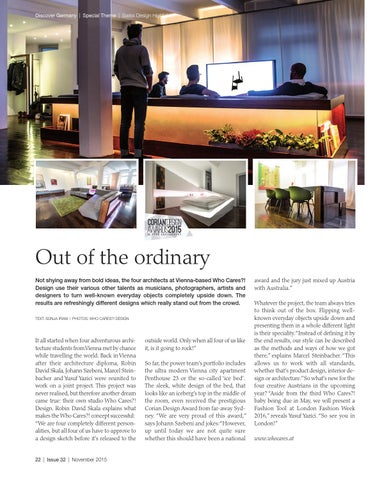 Out of the ordinary Not shying away from bold ideas, the four architects at Vienna-based Who Cares?! Design use their various other talents as musicians, photographers, artists and designers to turn well-known everyday objects completely upside down. The results are refreshingly different designs which really stand out from the crowd. TEXT: SONJA IRANI | PHOTOS: WHO CARES?! DESIGN

It all started when four adventurous architecture students fromVienna met by chance while travelling the world. Back in Vienna after their architecture diploma, Robin David Skala, Johann Szebeni, Marcel Steinbacher and Yusuf Yazici were reunited to work on a joint project. This project was never realised, but therefore another dream came true: their own studio Who Cares?! Design. Robin David Skala explains what makes the Who Cares?! concept successful: “We are four completely different personalities, but all four of us have to approve to a design sketch before it’s released to the

outside world. Only when all four of us like it, is it going to rock!” So far, the power team’s portfolio includes the ultra modern Vienna city apartment Penthouse 23 or the so-called ‘ice bed’. The sleek, white design of the bed, that looks like an iceberg’s top in the middle of the room, even received the prestigious Corian Design Award from far-away Sydney. “We are very proud of this award,” says Johann Szebeni and jokes:“However, up until today we are not quite sure whether this should have been a national

award and the jury just mixed up Austria with Australia.” Whatever the project, the team always tries to think out of the box. Flipping wellknown everyday objects upside down and presenting them in a whole different light is their speciality.“Instead of defining it by the end results, our style can be described as the methods and ways of how we got there,” explains Marcel Steinbacher. “This allows us to work with all standards, whether that’s product design, interior design or architecture.”So what’s new for the four creative Austrians in the upcoming year? “Aside from the third Who Cares?! baby being due in May, we will present a Fashion Tool at London Fashion Week 2016,” reveals Yusuf Yazici. “So see you in London!” www.whocares.at