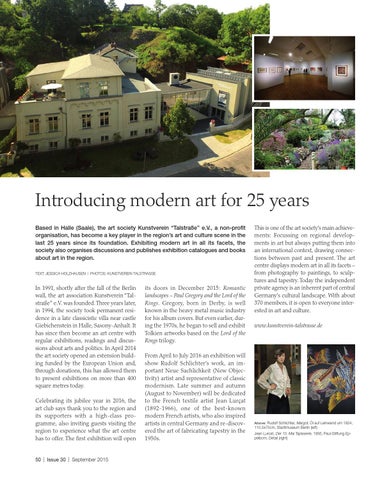 Introducing modern art for 25 years Based in Halle (Saale), the art society Kunstverein “Talstraße” e.V., a non-profit organisation, has become a key player in the region’s art and culture scene in the last 25 years since its foundation. Exhibiting modern art in all its facets, the society also organises discussions and publishes exhibition catalogues and books about art in the region. TEXT: JESSICA HOLZHAUSEN | PHOTOS: KUNSTVEREIN TALSTRASSE

In 1991, shortly after the fall of the Berlin wall, the art association Kunstverein “Talstraße” e.V. was founded. Three years later, in 1994, the society took permanent residence in a late classicistic villa near castle Giebichenstein in Halle, Saxony-Anhalt. It has since then become an art centre with regular exhibitions, readings and discussions about arts and politics. In April 2014 the art society opened an extension building funded by the European Union and, through donations, this has allowed them to present exhibitions on more than 400 square metres today. Celebrating its jubilee year in 2016, the art club says thank you to the region and its supporters with a high-class programme, also inviting guests visiting the region to experience what the art centre has to offer. The first exhibition will open

its doors in December 2015: Romantic landscapes – Paul Gregory and the Lord of the Rings. Gregory, born in Derby, is well known in the heavy metal music industry for his album covers. But even earlier, during the 1970s, he began to sell and exhibit Tolkien artworks based on the Lord of the Rings trilogy. From April to July 2016 an exhibition will show Rudolf Schlichter’s work, an important Neue Sachlichkeit (New Objectivity) artist and representative of classic modernism. Late summer and autumn (August to November) will be dedicated to the French textile artist Jean Lurçat (1892-1966), one of the best-known modern French artists, who also inspired artists in central Germany and re-discovered the art of fabricating tapestry in the 1950s.

This is one of the art society’s main achievements: Focussing on regional developments in art but always putting them into an international context, drawing connections between past and present. The art centre displays modern art in all its facets – from photography to paintings, to sculptures and tapestry. Today the independent private agency is an inherent part of central Germany’s cultural landscape. With about 370 members, it is open to everyone interested in art and culture. www.kunstverein-talstrasse.de