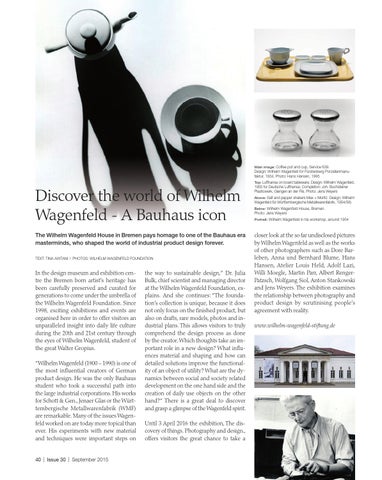 In the design museum and exhibition centre the Bremen born artist’s heritage has been carefully preserved and curated for generations to come under the umbrella of the Wilhelm Wagenfeld Foundation. Since 1998, exciting exhibitions and events are organised here in order to offer visitors an unparalleled insight into daily life culture during the 20th and 21st century through the eyes of Wilhelm Wagenfeld, student of the great Walter Gropius. “Wilhelm Wagenfeld (1900 – 1990) is one of the most influential creators of German product design. He was the only Bauhaus student who took a successful path into the large industrial corporations. His works for Schott &amp; Gen., Jenaer Glas or the Württembergische Metallwarenfabrik (WMF) are remarkable. Many of the issues Wagenfeld worked on are today more topical than ever. His experiments with new material and techniques were important steps on

the way to sustainable design,“ Dr. Julia Bulk, chief scientist and managing director at the Wilhelm Wagenfeld Foundation, explains. And she continues: “The foundation’s collection is unique, because it does not only focus on the finished product, but also on drafts, rare models, photos and industrial plans. This allows visitors to truly comprehend the design process as done by the creator. Which thoughts take an important role in a new design? What influences material and shaping and how can detailed solutions improve the functionality of an object of utility? What are the dynamics between social and society related development on the one hand side and the creation of daily use objects on the other hand?“ There is a great deal to discover and grasp a glimpse of the Wagenfeld spirit. Until 3 April 2016 the exhibition, The discovery of things. Photography and design., offers visitors the great chance to take a