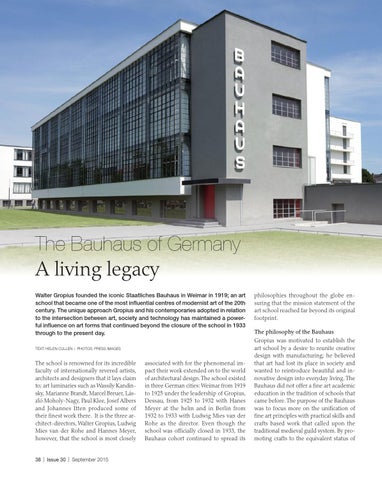 The Bauhaus of Germany A living legacy Walter Gropius founded the iconic Staatliches Bauhaus in Weimar in 1919; an art school that became one of the most influential centres of modernist art of the 20th century. The unique approach Gropius and his contemporaries adopted in relation to the intersection between art, society and technology has maintained a powerful influence on art forms that continued beyond the closure of the school in 1933 through to the present day. TEXT: HELEN CULLEN | PHOTOS: PRESS IMAGES

The school is renowned for its incredible faculty of internationally revered artists, architects and designers that it lays claim to; art luminaries such as Wassily Kandinsky, Marianne Brandt, Marcel Breuer, L谩szl贸 Moholy-Nagy, Paul Klee, Josef Albers and Johannes Itten produced some of their finest work there. It is the three architect-directors, Walter Gropius, Ludwig Mies van der Rohe and Hannes Meyer, however, that the school is most closely

associated with for the phenomenal impact their work extended on to the world of architectural design. The school existed in three German cities: Weimar from 1919 to 1925 under the leadership of Gropius, Dessau, from 1925 to 1932 with Hanes Meyer at the helm and in Berlin from 1932 to 1933 with Ludwig Mies van der Rohe as the director. Even though the school was officially closed in 1933, the Bauhaus cohort continued to spread its

philosophies throughout the globe ensuring that the mission statement of the art school reached far beyond its original footprint. The philosophy of the Bauhaus Gropius was motivated to establish the art school by a desire to reunite creative design with manufacturing; he believed that art had lost its place in society and wanted to reintroduce beautiful and innovative design into everyday living. The Bauhaus did not offer a fine art academic education in the tradition of schools that came before. The purpose of the Bauhaus was to focus more on the unification of fine art principles with practical skills and crafts based work that called upon the traditional medieval guild system. By promoting crafts to the equivalent status of