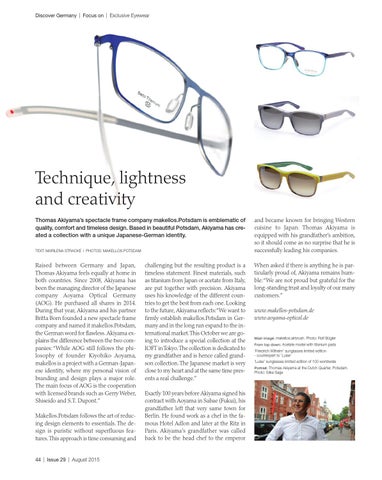 Raised between Germany and Japan, Thomas Akiyama feels equally at home in both countries. Since 2008, Akiyama has been the managing director of the Japanese company Aoyama Optical Germany (AOG). He purchased all shares in 2014. During that year, Akiyama and his partner Britta Born founded a new spectacle frame company and named it makellos.Potsdam, the German word for flawless. Akiyama explains the difference between the two companies: “While AOG still follows the philosophy of founder Kiyohiko Aoyama, makellos is a project with a German-Japanese identity, where my personal vision of branding and design plays a major role. The main focus of AOG is the cooperation with licensed brands such as Gerry Weber, Shiseido and S.T. Dupont.” Makellos.Potsdam follows the art of reducing design elements to essentials. The design is puristic without superfluous features. This approach is time consuming and

challenging but the resulting product is a timeless statement. Finest materials, such as titanium from Japan or acetate from Italy, are put together with precision. Akiyama uses his knowledge of the different countries to get the best from each one. Looking to the future, Akiyama reflects:“We want to firmly establish makellos.Potsdam in Germany and in the long run expand to the international market.This October we are going to introduce a special collection at the IOFT in Tokyo.The collection is dedicated to my grandfather and is hence called grandson collection. The Japanese market is very close to my heart and at the same time presents a real challenge.” Exactly 100 years before Akiyama signed his contract with Aoyama in Sabae (Fukui), his grandfather left that very same town for Berlin. He found work as a chef in the famous Hotel Adlon and later at the Ritz in Paris. Akiyama’s grandfather was called back to be the head chef to the emperor

and became known for bringing Western cuisine to Japan. Thomas Akiyama is equipped with his grandfather’s ambition, so it should come as no surprise that he is successfully leading his companies. When asked if there is anything he is particularly proud of, Akiyama remains humble:“We are not proud but grateful for the long-standing trust and loyalty of our many customers.” www.makellos-potsdam.de www.aoyama-optical.de