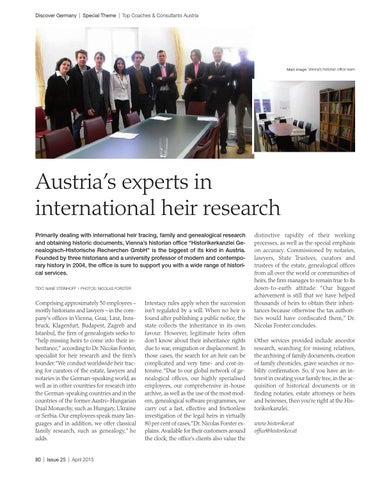 Austria’s experts in international heir research Primarily dealing with international heir tracing, family and genealogical research and obtaining historic documents, Vienna’s historian office “Historikerkanzlei Genealogisch-Historische Recherchen GmbH” is the biggest of its kind in Austria. Founded by three historians and a university professor of modern and contemporary history in 2004, the office is sure to support you with a wide range of historical services. TEXT: NANE STEINHOFF | PHOTOS: NICOLAS FORSTER

Comprising approximately 50 employees – mostly historians and lawyers – in the company’s offices in Vienna, Graz, Linz, Innsbruck, Klagenfurt, Budapest, Zagreb and Istanbul, the firm of genealogists seeks to “help missing heirs to come into their inheritance,” according to Dr. Nicolas Forster, specialist for heir research and the firm’s founder.“We conduct worldwide heir tracing for curators of the estate, lawyers and notaries in the German-speaking world, as well as in other countries for research into the German-speaking countries and in the countries of the former Austro-Hungarian Dual Monarchy, such as Hungary, Ukraine or Serbia. Our employees speak many languages and in addition, we offer classical family research, such as genealogy,” he adds.

Intestacy rules apply when the succession isn’t regulated by a will. When no heir is found after publishing a public notice, the state collects the inheritance in its own favour. However, legitimate heirs often don’t know about their inheritance rights due to war, emigration or displacement. In those cases, the search for an heir can be complicated and very time- and cost-intensive.“Due to our global network of genealogical offices, our highly specialised employees, our comprehensive in-house archive, as well as the use of the most modern, genealogical software programmes, we carry out a fast, effective and frictionless investigation of the legal heirs in virtually 80 per cent of cases,”Dr. Nicolas Forster explains. Available for their customers around the clock, the office’s clients also value the

distinctive rapidity of their working processes, as well as the special emphasis on accuracy. Commissioned by notaries, lawyers, State Trustees, curators and trustees of the estate, genealogical offices from all over the world or communities of heirs, the firm manages to remain true to its down-to-earth attitude: “Our biggest achievement is still that we have helped thousands of heirs to obtain their inheritances because otherwise the tax authorities would have confiscated them,” Dr. Nicolas Forster concludes. Other services provided include ancestor research, searching for missing relatives, the archiving of family documents, creation of family chronicles, grave searches or nobility confirmation. So, if you have an interest in creating your family tree, in the acquisition of historical documents or in finding notaries, estate attorneys or heirs and heiresses, then you’re right at the Historikerkanzlei. www.historiker.at office@historiker.at