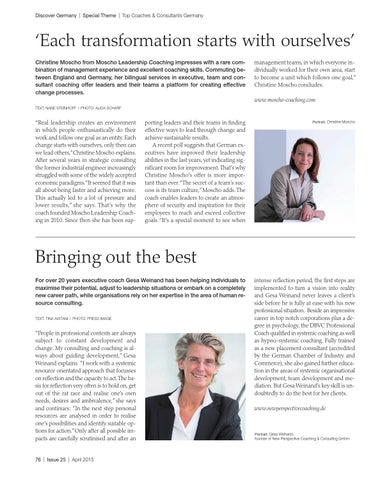 ‘Each transformation starts with ourselves’ Christine Moscho from Moscho Leadership Coaching impresses with a rare combination of management experience and excellent coaching skills. Commuting between England and Germany, her bilingual services in executive, team and consultant coaching offer leaders and their teams a platform for creating effective change processes.

management teams, in which everyone individually worked for their own area, start to become a unit which follows one goal,” Christine Moscho concludes. www.moscho-coaching.com

“Real leadership creates an environment in which people enthusiastically do their work and follow one goal as an entity. Each change starts with ourselves, only then can we lead others,”Christine Moscho explains. After several years in strategic consulting the former industrial engineer increasingly struggled with some of the widely accepted economic paradigms.“It seemed that it was all about being faster and achieving more. This actually led to a lot of pressure and lower results,” she says. That’s why the coach founded Moscho Leadership Coaching in 2010. Since then she has been sup-

porting leaders and their teams in finding effective ways to lead through change and achieve sustainable results. A recent poll suggests that German executives have improved their leadership abilities in the last years, yet indicating significant room for improvement. That’s why Christine Moscho’s offer is more important than ever.“The secret of a team’s success is its team culture,”Moscho adds. The coach enables leaders to create an atmosphere of security and inspiration for their employees to reach and exceed collective goals.“It’s a special moment to see when

Bringing out the best For over 20 years executive coach Gesa Weinand has been helping individuals to maximise their potential, adjust to leadership situations or embark on a completely new career path, while organisations rely on her expertise in the area of human resource consulting. TEXT: TINA AWTANI | PHOTO: PRESS IMAGE

”People in professional contexts are always subject to constant development and change. My consulting and coaching is always about guiding development,” Gesa Weinand explains. ”I work with a systemic resource orientated approach that focusses on reflection and the capacity to act.The basis for reflection very often is to hold on, get out of the rat race and realise one’s own needs, desires and ambivalence,” she says and continues: ”In the next step personal resources are analysed in order to realise one’s possibilities and identify suitable options for action.”Only after all possible impacts are carefully scrutinised and after an

intense reflection period, the first steps are implemented to turn a vision into reality and Gesa Weinand never leaves a client’s side before he is fully at ease with his new professional situation. Beside an impressive career in top notch corporations plus a degree in psychology, the DBVC Professional Coach qualified in systemic coaching as well as hypno-systemic coaching. Fully trained as a new placement consultant (accredited by the German Chamber of Industry and Commerce), she also gained further education in the areas of systemic organisational development, team development and mediation. But Gesa Weinand’s key skill is undoubtedly to do the best for her clients. www.newperspectivecoaching.de