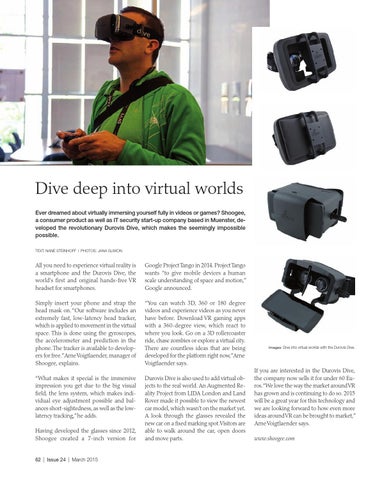 Dive deep into virtual worlds Ever dreamed about virtually immersing yourself fully in videos or games? Shoogee, a consumer product as well as IT security start-up company based in Muenster, developed the revolutionary Durovis Dive, which makes the seemingly impossible possible. TEXT: NANE STEINHOFF | PHOTOS: JANA SLIWON

All you need to experience virtual reality is a smartphone and the Durovis Dive, the world’s first and original hands-free VR headset for smartphones.

Simply insert your phone and strap the head mask on.“Our software includes an extremely fast, low-latency head tracker, which is applied to movement in the virtual space. This is done using the gyroscopes, the accelerometer and prediction in the phone. The tracker is available to developers for free.”ArneVoigtlaender, manager of Shoogee, explains.

“You can watch 3D, 360 or 180 degree videos and experience videos as you never have before. Download VR gaming apps with a 360-degree view, which react to where you look. Go on a 3D rollercoaster ride, chase zombies or explore a virtual city. There are countless ideas that are being developed for the platform right now,”Arne Voigtlaender says.

“What makes it special is the immersive impression you get due to the big visual field, the lens system, which makes individual eye adjustment possible and balances short-sightedness, as well as the lowlatency tracking,”he adds.

Durovis Dive is also used to add virtual objects to the real world. An Augmented Reality Project from LIDA London and Land Rover made it possible to view the newest car model, which wasn’t on the market yet. A look through the glasses revealed the new car on a fixed marking spot.Visitors are able to walk around the car, open doors and move parts.

Having developed the glasses since 2012, Shoogee created a 7-inch version for

Images: Dive into virtual worlds with the Durovis Dive.

If you are interested in the Durovis Dive, the company now sells it for under 60 Euros.“We love the way the market aroundVR has grown and is continuing to do so. 2015 will be a great year for this technology and we are looking forward to how even more ideas aroundVR can be brought to market,” Arne Voigtlaender says. www.shoogee.com