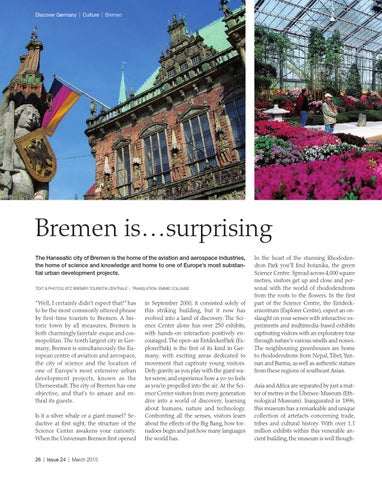 Bremen is…surprising The Hanseatic city of Bremen is the home of the aviation and aerospace industries, the home of science and knowledge and home to one of Europe’s most substantial urban development projects. TEXT &amp; PHOTOS: BTZ BREMER TOURISTIK-ZENTRALE | TRANSLATION: EMMIE COLLINGE

“Well, I certainly didn’t expect that!”has to be the most commonly uttered phrase by first-time tourists to Bremen. A historic town by all measures, Bremen is both charmingly fairytale-esque and cosmopolitan. The tenth largest city in Germany, Bremen is simultaneously the European centre of aviation and aerospace, the city of science and the location of one of Europe’s most extensive urban development projects, known as the Überseestadt. The city of Bremen has one objective, and that’s to amaze and enthral its guests. Is it a silver whale or a giant mussel? Seductive at first sight, the structure of the Science Center awakens your curiosity. When the Universum Bremen first opened

in September 2000, it consisted solely of this striking building, but it now has evolved into a land of discovery. The Science Center alone has over 250 exhibits, with hands-on interaction positively encouraged. The open-air EntdeckerPark (ExplorerPark) is the first of its kind in Germany, with exciting areas dedicated to movement that captivate young visitors. Defy gravity as you play with the giant water screw, and experience how a yo-yo feels as you’re propelled into the air. At the Science Center visitors from every generation dive into a world of discovery, learning about humans, nature and technology. Confronting all the senses, visitors learn about the effects of the Big Bang, how tornadoes begin and just how many languages the world has.

In the heart of the stunning Rhododendron Park you’ll find botanika, the green Science Centre. Spread across 4,000 square metres, visitors get up and close and personal with the world of rhododendrons from the roots to the flowers. In the first part of the Science Centre, the Entdeckerzentrum (Explorer Centre), expect an onslaught on your senses with interactive experiments and multimedia-based exhibits captivating visitors with an exploratory tour through nature’s various smells and noises. The neighbouring greenhouses are home to rhododendrons from Nepal, Tibet, Yunnan and Burma, as well as authentic statues from these regions of southeast Asian. Asia and Africa are separated by just a matter of metres in the Übersee-Museum (Ethnological Museum). Inaugurated in 1896, this museum has a remarkable and unique collection of artefacts concerning trade, tribes and cultural history. With over 1.1 million exhibits within this venerable ancient building, the museum is well though-