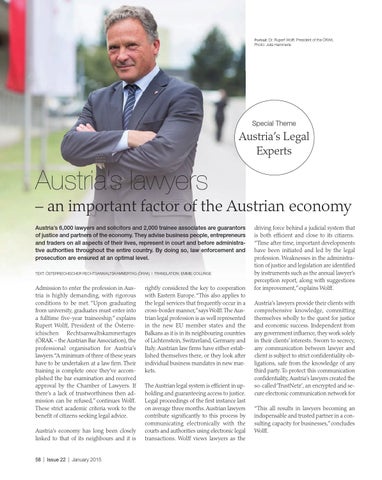 Austria’s lawyers – an important factor of the Austrian economy Austria’s 6,000 lawyers and solicitors and 2,000 trainee associates are guarantors of justice and partners of the economy. They advise business people, entrepreneurs and traders on all aspects of their lives, represent in court and before administrative authorities throughout the entire country. By doing so, law enforcement and prosecution are ensured at an optimal level. TEXT: ÖSTERREICHISCHER RECHTSANWALTSKAMMERTAG (ÖRAK) | TRANSLATION: EMMIE COLLINGE

Admission to enter the profession in Austria is highly demanding, with rigorous conditions to be met. “Upon graduating from university, graduates must enter into a fulltime five-year traineeship,” explains Rupert Wolff, President of the Österreichischen Rechtsanwaltskammertages (ÖRAK – the Austrian Bar Association), the professional organisation for Austria’s lawyers.“A minimum of three of these years have to be undertaken at a law firm. Their training is complete once they’ve accomplished the bar examination and received approval by the Chamber of Lawyers. If there’s a lack of trustworthiness then admission can be refused,” continues Wolff. These strict academic criteria work to the benefit of citizens seeking legal advice. Austria’s economy has long been closely linked to that of its neighbours and it is

rightly considered the key to cooperation with Eastern Europe. “This also applies to the legal services that frequently occur in a cross-border manner,”says Wolff. The Austrian legal profession is as well represented in the new EU member states and the Balkans as it is in its neighbouring countries of Lichtenstein, Switzerland, Germany and Italy. Austrian law firms have either established themselves there, or they look after individual business mandates in new markets. The Austrian legal system is efficient in upholding and guaranteeing access to justice. Legal proceedings of the first instance last on average three months. Austrian lawyers contribute significantly to this process by communicating electronically with the courts and authorities using electronic legal transactions. Wolff views lawyers as the

driving force behind a judicial system that is both efficient and close to its citizens. “Time after time, important developments have been initiated and led by the legal profession. Weaknesses in the administration of justice and legislation are identified by instruments such as the annual lawyer’s perception report, along with suggestions for improvement,” explains Wolff. Austria’s lawyers provide their clients with comprehensive knowledge, committing themselves wholly to the quest for justice and economic success. Independent from any government influence, they work solely in their clients’ interests. Sworn to secrecy, any communication between lawyer and client is subject to strict confidentiality obligations, safe from the knowledge of any third party. To protect this communication confidentiality, Austria’s lawyers created the so-called ‘TrustNetz’, an encrypted and secure electronic communication network for “This all results in lawyers becoming an indispensable and trusted partner in a consulting capacity for businesses,” concludes Wolff.