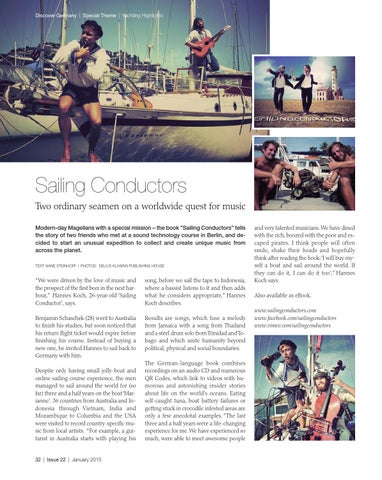 Sailing Conductors Two ordinary seamen on a worldwide quest for music Modern-day Magellans with a special mission – the book ”Sailing Conductors” tells the story of two friends who met at a sound technology course in Berlin, and decided to start an unusual expedition to collect and create unique music from across the planet. TEXT: NANE STEINHOFF | PHOTOS: DELIUS KLASING PUBLISHING HOUSE

“We were driven by the love of music and the prospect of the first beer in the next harbour,” Hannes Koch, 26-year-old ‘Sailing Conductor’, says.

song, before we sail the tape to Indonesia, where a bassist listens to it and then adds what he considers appropriate,” Hannes Koch describes.

Benjamin Schaschek (28) went to Australia to finish his studies, but soon noticed that his return flight ticket would expire before finishing his course. Instead of buying a new one, he invited Hannes to sail back to Germany with him.

Results are songs, which fuse a melody from Jamaica with a song from Thailand and a steel drum solo from Trinidad and Tobago and which unite humanity beyond political, physical and social boundaries.

Despite only having small jolly-boat and online sailing course experience, the men managed to sail around the world for (so far) three and a half years on the boat ‘Marianne’. 36 countries from Australia and Indonesia through Vietnam, India and Mozambique to Columbia and the USA were visited to record country-specific music from local artists. “For example, a guitarist in Australia starts with playing his

The German-language book combines recordings on an audio CD and numerous QR Codes, which link to videos with humorous and astonishing insider stories about life on the world’s oceans. Eating self-caught tuna, boat battery failures or getting stuck in crocodile infested areas are only a few anecdotal examples. “The last three and a half years were a life-changing experience for me. We have experienced so much, were able to meet awesome people