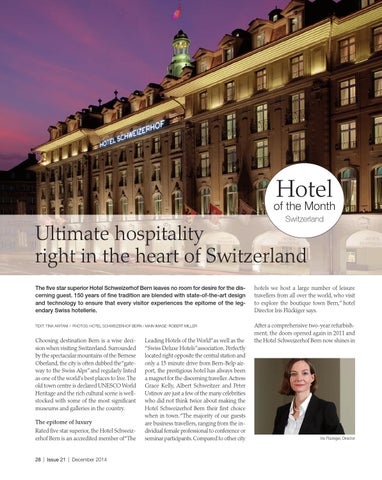 of the Month Switzerland

Ultimate hospitality right in the heart of Switzerland The five star superior Hotel Schweizerhof Bern leaves no room for desire for the discerning guest. 150 years of fine tradition are blended with state-of-the-art design and technology to ensure that every visitor experiences the epitome of the legendary Swiss hotellerie.

hotels we host a large number of leisure travellers from all over the world, who visit to explore the boutique town Bern,” hotel Director Iris Flückiger says.

After a comprehensive two-year refurbishment, the doors opened again in 2011 and the Hotel Schweizerhof Bern now shines in

Choosing destination Bern is a wise decision when visiting Switzerland. Surrounded by the spectacular mountains of the Bernese Oberland, the city is often dubbed the“gateway to the Swiss Alps”and regularly listed as one of the world’s best places to live.The old town centre is declared UNESCO World Heritage and the rich cultural scene is wellstocked with some of the most significant museums and galleries in the country. The epitome of luxury Rated five star superior, the Hotel Schweizerhof Bern is an accredited member of“The

Leading Hotels of the World”as well as the “Swiss Deluxe Hotels”association. Perfectly located right opposite the central station and only a 15 minute drive from Bern-Belp airport, the prestigious hotel has always been a magnet for the discerning traveller. Actress Grace Kelly, Albert Schweitzer and Peter Ustinov are just a few of the many celebrities who did not think twice about making the Hotel Schweizerhof Bern their first choice when in town.“The majority of our guests are business travellers, ranging from the individual female professional to conference or seminar participants. Compared to other city