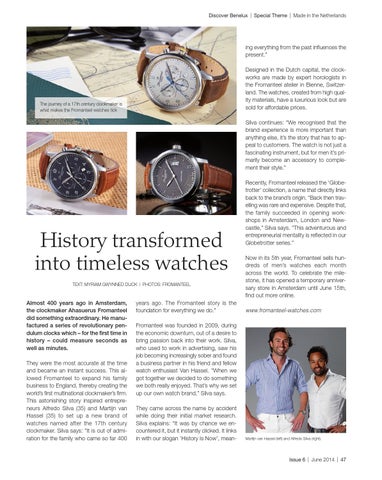 Discover Benelux | Special Theme | Made in the Netherlands

ing everything from the past influences the present.” Designed in the Dutch capital, the clockworks are made by expert horologists in the Fromanteel atelier in Bienne, Switzerland. The watches, created from high quality materials, have a luxurious look but are sold for affordable prices.

Silva continues: “We recognised that the brand experience is more important than anything else, it’s the story that has to appeal to customers. The watch is not just a fascinating instrument, but for men it’s primarily become an accessory to complement their style.”

Almost 400 years ago in Amsterdam, the clockmaker Ahasuerus Fromanteel did something extraordinary. He manufactured a series of revolutionary pendulum clocks which – for the first time in history – could measure seconds as well as minutes. They were the most accurate at the time and became an instant success. This allowed Fromanteel to expand his family business to England, thereby creating the world’s first multinational clockmaker’s firm. This astonishing story inspired entrepreneurs Alfredo Silva (35) and Martijn van Hassel (35) to set up a new brand of watches named after the 17th century clockmaker. Silva says: “It is out of admiration for the family who came so far 400

years ago. The Fromanteel story is the foundation for everything we do.”

Recently, Fromanteel released the ‘Globetrotter’ collection, a name that directly links back to the brand’s origin. “Back then travelling was rare and expensive. Despite that, the family succeeded in opening workshops in Amsterdam, London and Newcastle,” Silva says. “This adventurous and entrepreneurial mentality is reflected in our Globetrotter series.” Now in its 5th year, Fromanteel sells hundreds of men’s watches each month across the world. To celebrate the milestone, it has opened a temporary anniversary store in Amsterdam until June 15th, find out more online. www.fromanteel-watches.com

Fromanteel was founded in 2009, during the economic downturn, out of a desire to bring passion back into their work. Silva, who used to work in advertising, saw his job becoming increasingly sober and found a business partner in his friend and fellow watch enthusiast Van Hassel. “When we got together we decided to do something we both really enjoyed. That’s why we set up our own watch brand,” Silva says. They came across the name by accident while doing their initial market research. Silva explains: “It was by chance we encountered it, but it instantly clicked. It links in with our slogan ‘History Is Now’, mean-