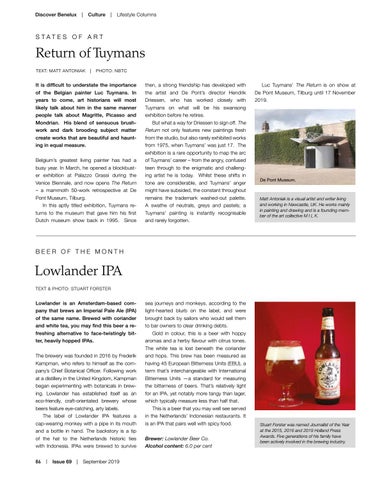 It is difficult to understate the importance of the Belgian painter Luc Tuymans. In years to come, art historians will most likely talk about him in the same manner people talk about Magritte, Picasso and Mondrian. His blend of sensuous brushwork and dark brooding subject matter create works that are beautiful and haunting in equal measure. Belgium’s greatest living painter has had a busy year. In March, he opened a blockbuster exhibition at Palazzo Grassi during the Venice Biennale, and now opens The Return – a mammoth 50-work retrospective at De Pont Museum, Tilburg. In this aptly titled exhibition, Tuymans returns to the museum that gave him his first Dutch museum show back in 1995. Since

then, a strong friendship has developed with the artist and De Pont’s director Hendrik Driessen, who has worked closely with Tuymans on what will be his swansong exhibition before he retires. But what a way for Driessen to sign off. The Return not only features new paintings fresh from the studio, but also rarely exhibited works from 1975, when Tuymans’ was just 17. The exhibition is a rare opportunity to map the arc of Tuymans’ career – from the angry, confused teen through to the enigmatic and challenging artist he is today. Whilst these shifts in tone are considerable, and Tuymans’ anger might have subsided, the constant throughout remains the trademark washed-out palette. A swathe of neutrals, greys and pastels; a Tuymans’ painting is instantly recognisable and rarely forgotten.

Luc Tuymans’ The Return is on show at De Pont Museum, Tilburg until 17 November 2019.

Lowlander is an Amsterdam-based company that brews an Imperial Pale Ale (IPA) of the same name. Brewed with coriander and white tea, you may find this beer a refreshing alternative to face-twistingly bitter, heavily hopped IPAs. The brewery was founded in 2016 by Frederik Kampman, who refers to himself as the company’s Chief Botanical Officer. Following work at a distillery in the United Kingdom, Kampman began experimenting with botanicals in brewing. Lowlander has established itself as an eco-friendly, craft-orientated brewery whose beers feature eye-catching, arty labels. The label of Lowlander IPA features a cap-wearing monkey with a pipe in its mouth and a bottle in hand. The backstory is a tip of the hat to the Netherlands historic ties with Indonesia. IPAs were brewed to survive 86  |  Issue 69  |  September 2019

sea journeys and monkeys, according to the light-hearted blurb on the label, and were brought back by sailors who would sell them to bar owners to clear drinking debts. Gold in colour, this is a beer with hoppy aromas and a herby flavour with citrus tones. The white tea is lost beneath the coriander and hops. This brew has been measured as having 45 European Bitterness Units (EBU), a term that’s interchangeable with International Bitterness Units —a standard for measuring the bitterness of beers. That’s relatively light for an IPA, yet notably more tangy than lager, which typically measure less than half that. This is a beer that you may well see served in the Netherlands’ Indonesian restaurants. It is an IPA that pairs well with spicy food. Brewer: Lowlander Beer Co. Alcohol content: 6.0 per cent

Promoting Belgium, The Netherlands and Luxembourg. On the cover of the September issue is International Emmy Award winning actor Maarten Hei...

Promoting Belgium, The Netherlands and Luxembourg. On the cover of the September issue is International Emmy Award winning actor Maarten Hei...