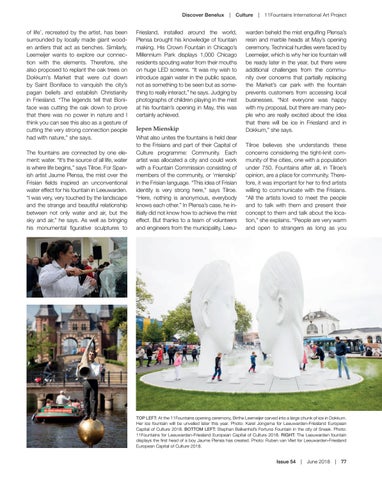 of life’, recreated by the artist, has been surrounded by locally made giant wooden antlers that act as benches. Similarly, Leemeijer wants to explore our connection with the elements. Therefore, she also proposed to replant the oak trees on Dokkum’s Market that were cut down by Saint Boniface to vanquish the city’s pagan beliefs and establish Christianity in Friesland. “The legends tell that Boniface was cutting the oak down to prove that there was no power in nature and I think you can see this also as a gesture of cutting the very strong connection people had with nature,” she says. The fountains are connected by one element: water. “It’s the source of all life, water is where life begins,” says Tilroe. For Spanish artist Jaume Plensa, the mist over the Frisian fields inspired an unconventional water effect for his fountain in Leeuwarden. “I was very, very touched by the landscape and the strange and beautiful relationship between not only water and air, but the sky and air,” he says. As well as bringing his monumental figurative sculptures to

Friesland, installed around the world, Plensa brought his knowledge of fountain making. His Crown Fountain in Chicago’s Millennium Park displays 1,000 Chicago residents spouting water from their mouths on huge LED screens. “It was my wish to introduce again water in the public space, not as something to be seen but as something to really interact,” he says. Judging by photographs of children playing in the mist at his fountain’s opening in May, this was certainly achieved.

warden beheld the mist engulfing Plensa’s resin and marble heads at May’s opening ceremony. Technical hurdles were faced by Leemeijer, which is why her ice fountain will be ready later in the year, but there were additional challenges from the community over concerns that partially replacing the Market’s car park with the fountain prevents customers from accessing local businesses. “Not everyone was happy with my proposal, but there are many people who are really excited about the idea that there will be ice in Friesland and in Dokkum,” she says.

What also unites the fountains is held dear to the Frisians and part of their Capital of Culture programme: Community. Each artist was allocated a city and could work with a Fountain Commission consisting of members of the community, or ‘mienskip’ in the Frisian language. “This idea of Frisian identity is very strong here,” says Tilroe. “Here, nothing is anonymous, everybody knows each other.” In Plensa’s case, he initially did not know how to achieve the mist effect. But thanks to a team of volunteers and engineers from the municipality, Leeu-

Tilroe believes she understands these concerns considering the tight-knit community of the cities, one with a population under 750. Fountains after all, in Tilroe’s opinion, are a place for community. Therefore, it was important for her to find artists willing to communicate with the Frisians. “All the artists loved to meet the people and to talk with them and present their concept to them and talk about the location,” she explains. “People are very warm and open to strangers as long as you