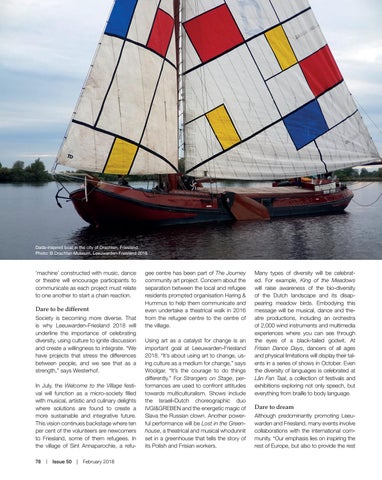 ‘machine’ constructed with music, dance or theatre will encourage participants to communicate as each project must relate to one another to start a chain reaction.

Dare to be different Society is becoming more diverse. That is why Leeuwarden-Friesland 2018 will underline the importance of celebrating diversity, using culture to ignite discussion and create a willingness to integrate. “We have projects that stress the differences between people, and we see that as a strength,” says Westerhof. In July, the Welcome to the Village festival will function as a micro-society filled with musical, artistic and culinary delights where solutions are found to create a more sustainable and integrative future. This vision continues backstage where ten per cent of the volunteers are newcomers to Friesland, some of them refugees. In the village of Sint Annaparochie, a refu78  |  Issue 50  |  February 2018

gee centre has been part of The Journey community art project. Concern about the separation between the local and refugee residents prompted organisation Haring & Hummus to help them communicate and even undertake a theatrical walk in 2016 from the refugee centre to the centre of the village. Using art as a catalyst for change is an important goal at Leeuwarden-Friesland 2018. “It’s about using art to change, using culture as a medium for change,” says Woolgar. “It’s the courage to do things differently.” For Strangers on Stage, performances are used to confront attitudes towards multiculturalism. Shows include the Israeli-Dutch choreographic duo IVGI&GREBEN and the energetic magic of Slava the Russian clown. Another powerful performance will be Lost in the Greenhouse, a theatrical and musical whodunnit set in a greenhouse that tells the story of its Polish and Frisian workers.

Many types of diversity will be celebrated. For example, King of the Meadows will raise awareness of the bio-diversity of the Dutch landscape and its disappearing meadow birds. Embodying this message will be musical, dance and theatre productions, including an orchestra of 2,000 wind instruments and multimedia experiences where you can see through the eyes of a black-tailed godwit. At Frisian Dance Days, dancers of all ages and physical limitations will display their talents in a series of shows in October. Even the diversity of languages is celebrated at Lân Fan Taal, a collection of festivals and exhibitions exploring not only speech, but everything from braille to body language.

Dare to dream Although predominantly promoting Leeuwarden and Friesland, many events involve collaborations with the international community. “Our emphasis lies on inspiring the rest of Europe, but also to provide the rest