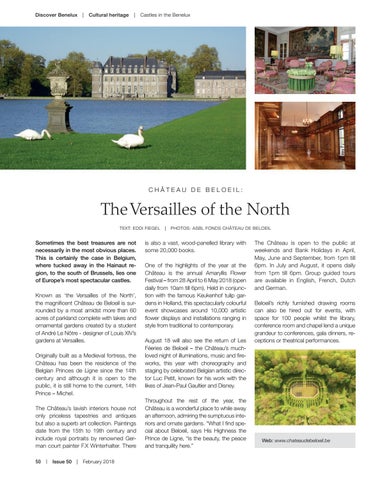 Sometimes the best treasures are not necessarily in the most obvious places. This is certainly the case in Belgium, where tucked away in the Hainaut region, to the south of Brussels, lies one of Europe’s most spectacular castles. Known as ‘the Versailles of the North’, the magnificent Château de Beloeil is surrounded by a moat amidst more than 60 acres of parkland complete with lakes and ornamental gardens created by a student of André Le Nôtre - designer of Louis XIV’s gardens at Versailles. Originally built as a Medieval fortress, the Château has been the residence of the Belgian Princes de Ligne since the 14th century and although it is open to the public, it is still home to the current, 14th Prince – Michel. The Château’s lavish interiors house not only priceless tapestries and antiques but also a superb art collection. Paintings date from the 15th to 19th century and include royal portraits by renowned German court painter F.X Winterhalter. There 50  |  Issue 50  |  February 2018

is also a vast, wood-panelled library with some 20,000 books. One of the highlights of the year at the Château is the annual Amaryllis Flower Festival – from 28 April to 6 May 2018 (open daily from 10am till 6pm). Held in conjunction with the famous Keukenhof tulip gardens in Holland, this spectacularly colourful event showcases around 10,000 artistic flower displays and installations ranging in style from traditional to contemporary. August 18 will also see the return of Les Féeries de Beloeil – the Château’s muchloved night of illuminations, music and fireworks, this year with choreography and staging by celebrated Belgian artistic director Luc Petit, known for his work with the likes of Jean-Paul Gaultier and Disney. Throughout the rest of the year, the Château is a wonderful place to while away an afternoon, admiring the sumptuous interiors and ornate gardens. “What I find special about Beloeil, says His Highness the Prince de Ligne, “is the beauty, the peace and tranquility here.”

The Château is open to the public at weekends and Bank Holidays in April, May, June and September, from 1pm till 6pm. In July and August, it opens daily from 1pm till 6pm. Group guided tours are available in English, French, Dutch and German. Beloeil’s richly furnished drawing rooms can also be hired out for events, with space for 100 people whilst the library, conference room and chapel lend a unique grandeur to conferences, gala dinners, receptions or theatrical performances.