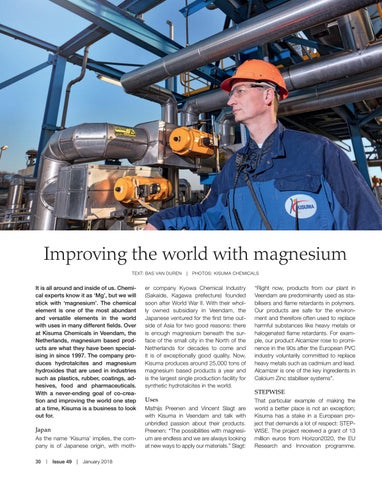 It is all around and inside of us. Chemical experts know it as ‘Mg’, but we will stick with ‘magnesium’. The chemical element is one of the most abundant and versatile elements in the world with uses in many different fields. Over at Kisuma Chemicals in Veendam, the Netherlands, magnesium based products are what they have been specialising in since 1997. The company produces hydrotalcites and magnesium hydroxides that are used in industries such as plastics, rubber, coatings, adhesives, food and pharmaceuticals. With a never-ending goal of co-creation and improving the world one step at a time, Kisuma is a business to look out for.

er company Kyowa Chemical Industry (Sakaide, Kagawa prefecture) founded soon after World War II. With their wholly owned subsidiary in Veendam, the Japanese ventured for the first time outside of Asia for two good reasons: there is enough magnesium beneath the surface of the small city in the North of the Netherlands for decades to come and it is of exceptionally good quality. Now, Kisuma produces around 25,000 tons of magnesium based products a year and is the largest single production facility for synthetic hydrotalcites in the world.

Uses Mathijs Preenen and Vincent Slagt are with Kisuma in Veendam and talk with unbridled passion about their products. Preenen: “The possibilities with magnesium are endless and we are always looking at new ways to apply our materials.” Slagt:

“Right now, products from our plant in Veendam are predominantly used as stabilisers and flame retardants in polymers. Our products are safe for the environment and therefore often used to replace harmful substances like heavy metals or halogenated flame retardants. For example, our product Alcamizer rose to prominence in the 90s after the European PVC industry voluntarily committed to replace heavy metals such as cadmium and lead. Alcamizer is one of the key ingredients in Calcium Zinc stabiliser systems”.

STEPWISE That particular example of making the world a better place is not an exception; Kisuma has a stake in a European project that demands a lot of respect: STEPWISE. The project received a grant of 13 million euros from Horizon2020, the EU Research and Innovation programme.