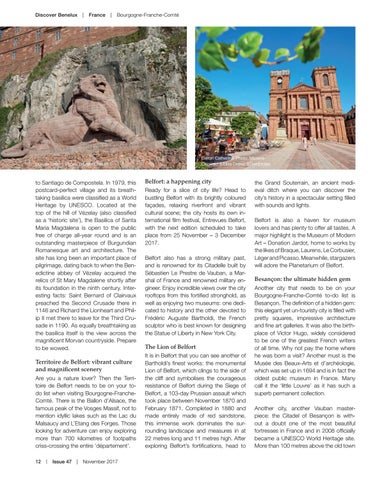 to Santiago de Compostela. In 1979, this postcard-perfect village and its breathtaking basilica were classified as a World Heritage by UNESCO. Located at the top of the hill of Vézelay (also classified as a ‘historic site’), the Basilica of Santa Maria Magdalena is open to the public free of charge all-year round and is an outstanding masterpiece of Burgundian Romanesque art and architecture. The site has long been an important place of pilgrimage, dating back to when the Benedictine abbey of Vézelay acquired the relics of St Mary Magdalene shortly after its foundation in the ninth century. Interesting facts: Saint Bernard of Clairvaux preached the Second Crusade there in 1146 and Richard the Lionheart and Philip II met there to leave for the Third Crusade in 1190. As equally breathtaking as the basilica itself is the view across the magnificent Morvan countryside. Prepare to be wowed.

Territoire de Belfort: vibrant culture and magnificent scenery Are you a nature lover? Then the Territoire de Belfort needs to be on your todo list when visiting Bourgogne-FrancheComté. There is the Ballon d’Alsace, the famous peak of the Vosges Massif, not to mention idyllic lakes such as the Lac du Malsaucy and L’Etang des Forges. Those looking for adventure can enjoy exploring more than 700 kilometres of footpaths criss-crossing the entire ‘département’. 12  |  Issue 47  |  November 2017

Belfort: a happening city Ready for a slice of city life? Head to bustling Belfort with its brightly coloured façades, relaxing riverfront and vibrant cultural scene; the city hosts its own international film festival, Entrevues Belfort, with the next edition scheduled to take place from 25 November – 3 December 2017. Belfort also has a strong military past, and is renowned for its Citadelle built by Sébastien Le Prestre de Vauban, a Marshal of France and renowned military engineer. Enjoy incredible views over the city rooftops from this fortified stronghold, as well as enjoying two museums: one dedicated to history and the other devoted to Frédéric Auguste Bartholdi, the French sculptor who is best known for designing the Statue of Liberty in New York City.

The Lion of Belfort It is in Belfort that you can see another of Bartholdi’s finest works: the monumental Lion of Belfort, which clings to the side of the cliff and symbolises the courageous resistance of Belfort during the Siege of Belfort, a 103-day Prussian assault which took place between November 1870 and February 1871. Completed in 1880 and made entirely made of red sandstone, this immense work dominates the surrounding landscape and measures in at 22 metres long and 11 metres high. After exploring Belfort’s fortifications, head to

the Grand Souterrain, an ancient medieval ditch where you can discover the city’s history in a spectacular setting filled with sounds and lights. Belfort is also a haven for museum lovers and has plenty to offer all tastes. A major highlight is the Museum of Modern Art – Donation Jardot, home to works by the likes of Braque, Laurens, Le Corbusier, Léger and Picasso. Meanwhile, stargazers will adore the Planetarium of Belfort.

Besançon: the ultimate hidden gem Another city that needs to be on your Bourgogne-Franche-Comté to-do list is Besançon. The definition of a hidden gem: this elegant yet un-touristy city is filled with pretty squares, impressive architecture and fine art galleries. It was also the birthplace of Victor Hugo, widely considered to be one of the greatest French writers of all time. Why not pay the home where he was born a visit? Another must is the Musée des Beaux-Arts et d’archéologie, which was set up in 1694 and is in fact the oldest public museum in France. Many call it the ‘little Louvre’ as it has such a superb permanent collection. Another city, another Vauban masterpiece: the Citadel of Besançon is without a doubt one of the most beautiful fortresses in France and in 2008 officially became a UNESCO World Heritage site. More than 100 metres above the old town