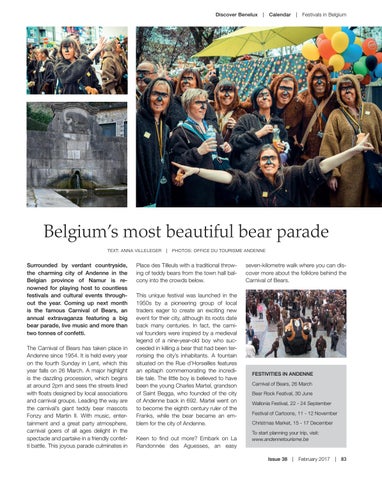 Surrounded by verdant countryside, the charming city of Andenne in the Belgian province of Namur is renowned for playing host to countless festivals and cultural events throughout the year. Coming up next month is the famous Carnival of Bears, an annual extravaganza featuring a big bear parade, live music and more than two tonnes of confetti. The Carnival of Bears has taken place in Andenne since 1954. It is held every year on the fourth Sunday in Lent, which this year falls on 26 March. A major highlight is the dazzling procession, which begins at around 2pm and sees the streets lined with floats designed by local associations and carnival groups. Leading the way are the carnival’s giant teddy bear mascots Fonzy and Martin II. With music, entertainment and a great party atmosphere, carnival goers of all ages delight in the spectacle and partake in a friendly confetti battle. This joyous parade culminates in

Place des Tilleuls with a traditional throwing of teddy bears from the town hall balcony into the crowds below. This unique festival was launched in the 1950s by a pioneering group of local traders eager to create an exciting new event for their city, although its roots date back many centuries. In fact, the carnival founders were inspired by a medieval legend of a nine-year-old boy who succeeded in killing a bear that had been terrorising the city’s inhabitants. A fountain situated on the Rue d’Horseilles features an epitaph commemorating the incredible tale. The little boy is believed to have been the young Charles Martel, grandson of Saint Begga, who founded of the city of Andenne back in 692. Martel went on to become the eighth century ruler of the Franks, while the bear became an emblem for the city of Andenne. Keen to find out more? Embark on La Randonnée des Aguesses, an easy

seven-kilometre walk where you can discover more about the folklore behind the Carnival of Bears.