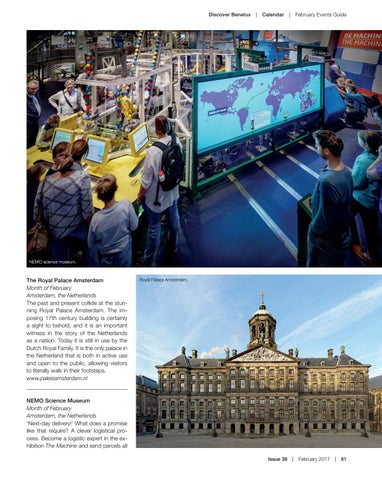 The Royal Palace Amsterdam Month of February Amsterdam, the Netherlands The past and present collide at the stunning Royal Palace Amsterdam. The imposing 17th century building is certainly a sight to behold, and it is an important witness in the story of the Netherlands as a nation. Today it is still in use by the Dutch Royal Family. It is the only palace in the Netherland that is both in active use and open to the public, allowing visitors to literally walk in their footsteps. www.paleisamsterdam.nl

NEMO Science Museum Month of February Amsterdam, the Netherlands ‘Next-day delivery!’ What does a promise like that require? A clever logistical process. Become a logistic expert in the exhibition The Machine and send parcels all Issue 38  |  February 2017  |  81