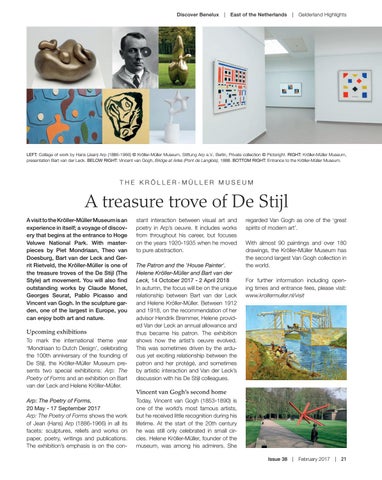 A treasure trove of De Stijl A visit to the Kröller-Müller Museum is an experience in itself; a voyage of discovery that begins at the entrance to Hoge Veluwe National Park. With masterpieces by Piet Mondriaan, Theo van Doesburg, Bart van der Leck and Gerrit Rietveld, the Kröller-Müller is one of the treasure troves of the De Stijl (The Style) art movement. You will also find outstanding works by Claude Monet, Georges Seurat, Pablo Picasso and Vincent van Gogh. In the sculpture garden, one of the largest in Europe, you can enjoy both art and nature.

stant interaction between visual art and poetry in Arp’s oeuvre. It includes works from throughout his career, but focuses on the years 1920-1935 when he moved to pure abstraction. The Patron and the 'House Painter'. Helene Kröller-Müller and Bart van der Leck, 14 October 2017 - 2 April 2018 In autumn, the focus will be on the unique relationship between Bart van der Leck and Helene Kröller-Müller. Between 1912 and 1918, on the recommendation of her advisor Hendrik Bremmer, Helene provided Van der Leck an annual allowance and thus became his patron. The exhibition shows how the artist’s oeuvre evolved. This was sometimes driven by the arduous yet exciting relationship between the patron and her protégé, and sometimes by artistic interaction and Van der Leck’s discussion with his De Stijl colleagues.

regarded Van Gogh as one of the ‘great spirits of modern art’. With almost 90 paintings and over 180 drawings, the Kröller-Müller Museum has the second largest Van Gogh collection in the world. For further information including opening times and entrance fees, please visit: www.krollermuller.nl/visit

Vincent van Gogh’s second home Today, Vincent van Gogh (1853-1890) is one of the world’s most famous artists, but he received little recognition during his lifetime. At the start of the 20th century he was still only celebrated in small circles. Helene Kröller-Müller, founder of the museum, was among his admirers. She Issue 38  |  February 2017  |  21