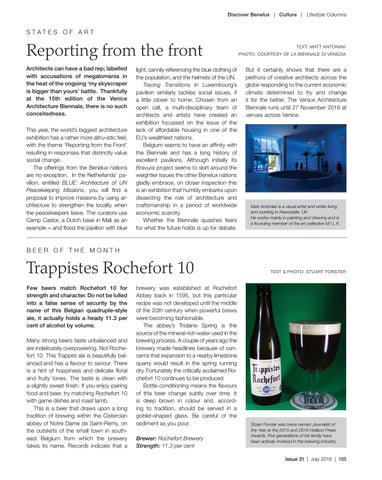 Reporting from the front Architects can have a bad rep; labelled with accusations of megalomania in the heat of the ongoing ‘my skyscraper is bigger than yours’ battle. Thankfully at the 15th edition of the Venice Architecture Biennale, there is no such conceitedness. This year, the world’s biggest architecture exhibition has a rather more altru-istic feel, with the theme ‘Reporting from the Front’ resulting in responses that distinctly value social change. The offerings from the Benelux nations are no exception. In the Netherlands’ pavilion, entitled BLUE: Architecture of UN Peacekeeping Missions, you will find a proposal to improve missions by using architecture to strengthen the locality when the peacekeepers leave. The curators use Camp Castor, a Dutch base in Mali as an example – and flood the pavilion with blue

light, cannily referencing the blue clothing of the population, and the helmets of the UN. Tracing Transitions in Luxembourg’s pavilion similarly tackles social issues, if a little closer to home. Chosen from an open call, a multi-disciplinary team of architects and artists have created an exhibition focussed on the issue of the lack of affordable housing in one of the EU’s wealthiest nations. Belgium seems to have an affinity with the Biennale and has a long history of excellent pavilions. Although initially its Bravura project seems to skirt around the weightier issues the other Benelux nations gladly embrace, on closer inspection this is an exhibition that humbly embarks upon dissecting the role of architecture and craftsmanship in a period of worldwide economic scarcity. Whether the Biennale quashes fears for what the future holds is up for debate.

But it certainly shows that there are a plethora of creative architects across the globe responding to the current economic climate determined to try and change it for the better. The Venice Architecture Biennale runs until 27 November 2016 at venues across Venice.

Trappistes Rochefort 10 Few beers match Rochefort 10 for strength and character. Do not be lulled into a false sense of security by the name of this Belgian quadruple-style ale, it actually holds a heady 11.3 per cent of alcohol by volume. Many strong beers taste unbalanced and are indelicately overpowering. Not Rochefort 10. This Trappist ale is beautifully balanced and has a flavour to savour. There is a hint of hoppiness and delicate floral and fruity tones. The taste is clean with a slightly sweet finish. If you enjoy pairing food and beer, try matching Rochefort 10 with game dishes and roast lamb. This is a beer that draws upon a long tradition of brewing within the Cistercian abbey of Notre Dame de Saint-Remy, on the outskirts of the small town in southeast Belgium from which the brewery takes its name. Records indicate that a

brewery was established at Rochefort Abbey back in 1595, but this particular recipe was not developed until the middle of the 20th century when powerful brews were becoming fashionable. The abbey’s Tridaine Spring is the source of the mineral-rich water used in the brewing process. A couple of years ago the brewery made headlines because of concerns that expansion to a nearby limestone quarry would result in the spring running dry. Fortunately the critically acclaimed Rochefort 10 continues to be produced. Bottle conditioning means the flavours of this beer change subtly over time. It is deep brown in colour and, according to tradition, should be served in a goblet-shaped glass. Be careful of the sediment as you pour. Brewer: Rochefort Brewery Strength: 11.3 per cent