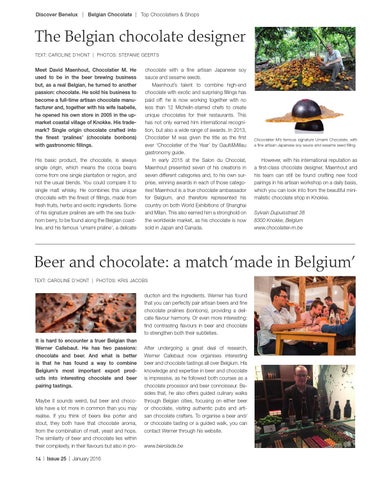 Meet David Maenhout, Chocolatier M. He used to be in the beer brewing business but, as a real Belgian, he turned to another passion: chocolate. He sold his business to become a full-time artisan chocolate manufacturer and, together with his wife Isabelle, he opened his own store in 2005 in the upmarket coastal village of Knokke. His trademark? Single origin chocolate crafted into the finest ‘pralines’ (chocolate bonbons) with gastronomic fillings. His basic product, the chocolate, is always single origin, which means the cocoa beans come from one single plantation or region, and not the usual blends. You could compare it to single malt whisky. He combines this unique chocolate with the finest of fillings, made from fresh fruits, herbs and exotic ingredients. Some of his signature pralines are with the sea buckhorn berry, to be found along the Belgian coastline, and his famous ‘umami praline’, a delicate

chocolate with a fine artisan Japanese soy sauce and sesame seeds. Maenhout’s talent to combine high-end chocolate with exotic and surprising fillings has paid off: he is now working together with no less than 12 Michelin-starred chefs to create unique chocolates for their restaurants. This has not only earned him international recognition, but also a wide range of awards. In 2013, Chocolatier M was given the title as the first ever ‘Chocolatier of the Year’ by Gault&amp;Millau gastronomy guide. In early 2015 at the Salon du Chocolat, Maenhout presented seven of his creations in seven different categories and, to his own surprise, winning awards in each of those categories! Maenhout is a true chocolate ambassador for Belgium, and therefore represented his country on both World Exhibitions of Shanghai and Milan. This also earned him a stronghold on the worldwide market, as his chocolate is now sold in Japan and Canada.

However, with his international reputation as a first-class chocolate designer, Maenhout and his team can still be found crafting new food pairings in his artisan workshop on a daily basis, which you can look into from the beautiful minimalistic chocolate shop in Knokke. Sylvain Dupuisstraat 38 8300 Knokke, Belgium www.chocolatier-m.be

duction and the ingredients. Werner has found that you can perfectly pair artisan beers and fine chocolate pralines (bonbons), providing a delicate flavour harmony. Or even more interesting: find contrasting flavours in beer and chocolate to strengthen both their subtleties. It is hard to encounter a truer Belgian than Werner Callebaut. He has two passions: chocolate and beer. And what is better is that he has found a way to combine Belgium’s most important export products into interesting chocolate and beer pairing tastings. Maybe it sounds weird, but beer and chocolate have a lot more in common than you may realise. If you think of beers like porter and stout, they both have that chocolate aroma, from the combination of malt, yeast and hops. The similarity of beer and chocolate lies within their complexity, in their flavours but also in pro14 | Issue 25 | January 2016

After undergoing a great deal of research, Werner Callebaut now organises interesting beer and chocolate tastings all over Belgium. His knowledge and expertise in beer and chocolate is impressive, as he followed both courses as a chocolate processor and beer connoisseur. Besides that, he also offers guided culinary walks through Belgian cities, focusing on either beer or chocolate, visiting authentic pubs and artisan chocolate crafters. To organise a beer and/ or chocolate tasting or a guided walk, you can contact Werner through his website. www.bierolade.be