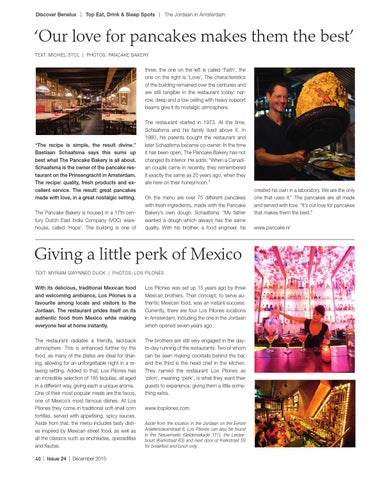 three; the one on the left is called ‘Faith’, the one on the right is ‘Love’. The characteristics of the building remained over the centuries and are still tangible in the restaurant today: narrow, deep and a low ceiling with heavy support beams give it its nostalgic atmosphere.

“The recipe is simple, the result divine.” Bastiaan Schaafsma says this sums up best what The Pancake Bakery is all about. Schaafsma is the owner of the pancake restaurant on the Prinsengracht in Amsterdam. The recipe: quality, fresh products and excellent service. The result: great pancakes made with love, in a great nostalgic setting. The Pancake Bakery is housed in a 17th century Dutch East India Company (VOC) warehouse, called ‘Hope’. The building is one of

The restaurant started in 1973. At the time, Schaafsma and his family lived above it. In 1980, his parents bought the restaurant and later Schaafsma became co-owner. In the time it has been open, The Pancake Bakery has not changed its interior. He adds: “When a Canadian couple came in recently, they remembered it exactly the same as 20 years ago, when they ate here on their honeymoon.” On the menu are over 75 different pancakes with fresh ingredients, made with the Pancake Bakery’s own dough. Schaafsma: “My father wanted a dough which always has the same quality. With his brother, a food engineer, he

With its delicious, traditional Mexican food and welcoming ambiance, Los Pilones is a favourite among locals and visitors to the Jordaan. The restaurant prides itself on its authentic food from Mexico while making everyone feel at home instantly.

Los Pilones was set up 15 years ago by three Mexican brothers. Their concept, to serve authentic Mexican food, was an instant success. Currently, there are four Los Pilones locations in Amsterdam, including the one in the Jordaan which opened seven years ago.

The restaurant radiates a friendly, laid-back atmosphere. This is enhanced further by the food, as many of the plates are ideal for sharing, allowing for an unforgettable night in a relaxing setting. Added to that, Los Pilones has an incredible selection of 185 tequilas, all aged in a different way, giving each a unique aroma. One of their most popular meals are the tacos, one of Mexico’s most famous dishes. At Los Pilones they come in traditional soft-shell corn tortillas, served with appetising, spicy sauces. Aside from that, the menu includes tasty dishes inspired by Mexican street food, as well as all the classics such as enchiladas, quesadillas and flautas.

The brothers are still very engaged in the dayto-day running of the restaurants. Two of whom can be seen making cocktails behind the bar, and the third is the head chef in the kitchen. They named the restaurant Los Pilones as ‘pilon’, meaning ‘perk’, is what they want their guests to experience: giving them a little something extra.

www.lospilones.com Aside from the location in the Jordaan on the Eerste Anjeliersdwarstraat 6, Los Pilones can also be found in the Nieuwmarkt (Geldersekade 111), the Leidsebuurt (Kerkstraat 63) and next door at Kerkstraat 59 for breakfast and lunch only.

created his own in a laboratory. We are the only one that uses it.” The pancakes are all made and served with love. “It’s our love for pancakes that makes them the best.” www.pancake.nl