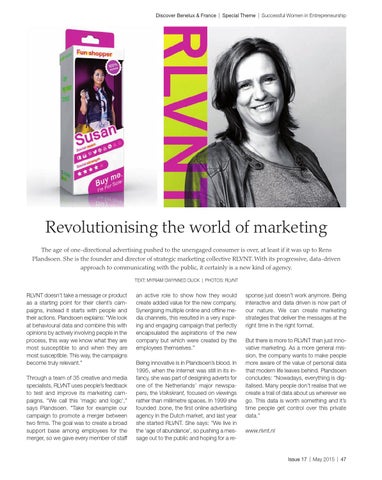 Revolutionising the world of marketing The age of one-directional advertising pushed to the unengaged consumer is over, at least if it was up to Rens Plandsoen. She is the founder and director of strategic marketing collective RLVNT. With its progressive, data-driven approach to communicating with the public, it certainly is a new kind of agency. TEXT: MyRIAM GWyNNED DIJCK | PHOTOS: RLVNT

RLVNT doesn’t take a message or product as a starting point for their client’s campaigns, instead it starts with people and their actions. Plandsoen explains: “We look at behavioural data and combine this with opinions by actively involving people in the process, this way we know what they are most susceptible to and when they are most susceptible. This way, the campaigns become truly relevant.” Through a team of 35 creative and media specialists, RLVNT uses people’s feedback to test and improve its marketing campaigns. “We call this ‘magic and logic’,” says Plandsoen. “Take for example our campaign to promote a merger between two firms. The goal was to create a broad support base among employees for the merger, so we gave every member of staff

an active role to show how they would create added value for the new company. Synergising multiple online and offline media channels, this resulted in a very inspiring and engaging campaign that perfectly encapsulated the aspirations of the new company but which were created by the employees themselves.” Being innovative is in Plandsoen’s blood. In 1995, when the internet was still in its infancy, she was part of designing adverts for one of the Netherlands’ major newspapers, the Volkskrant, focused on viewings rather than millimetre spaces. In 1999 she founded .bone, the first online advertising agency in the Dutch market, and last year she started RLVNT. She says: “We live in the ‘age of abundance’, so pushing a message out to the public and hoping for a re-

sponse just doesn’t work anymore. Being interactive and data driven is now part of our nature. We can create marketing strategies that deliver the messages at the right time in the right format. But there is more to RLVNT than just innovative marketing. As a more general mission, the company wants to make people more aware of the value of personal data that modern life leaves behind. Plandsoen concludes: “Nowadays, everything is digitalised. Many people don’t realise that we create a trail of data about us wherever we go. This data is worth something and it’s time people get control over this private data.” www.rlvnt.nl