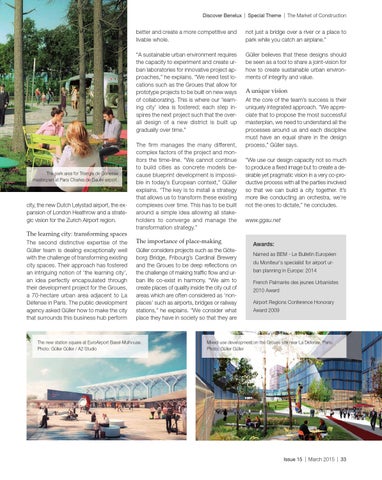 city, the new Dutch Lelystad airport, the expansion of London Heathrow and a strategic vision for the Zurich Airport region.

better and create a more competitive and livable whole.

not just a bridge over a river or a place to park while you catch an airplane.”

“A sustainable urban environment requires the capacity to experiment and create urban laboratories for innovative project approaches,” he explains. “We need test locations such as the Groues that allow for prototype projects to be built on new ways of collaborating. This is where our ‘learning city’ idea is fostered; each step inspires the next project such that the overall design of a new district is built up gradually over time.”

Güller believes that these designs should be seen as a tool to share a joint-vision for how to create sustainable urban environments of integrity and value.

The firm manages the many different, complex factors of the project and monitors the time-line. “We cannot continue to build cities as concrete models because blueprint development is impossible in today’s European context,” Güller explains. “The key is to install a strategy that allows us to transform these existing complexes over time. This has to be built around a simple idea allowing all stakeholders to converge and manage the transformation strategy.”

A unique vision At the core of the team’s success is their uniquely integrated approach. “We appreciate that to propose the most successful masterplan, we need to understand all the processes around us and each discipline must have an equal share in the design process,” Güller says. “We use our design capacity not so much to produce a fixed image but to create a desirable yet pragmatic vision in a very co-productive process with all the parties involved so that we can build a city together. It’s more like conducting an orchestra, we’re not the ones to dictate,” he concludes. www.ggau.net

The learning city: transforming spaces The second distinctive expertise of the Güller team is dealing exceptionally well with the challenge of transforming existing city spaces. Their approach has fostered an intriguing notion of ‘the learning city’, an idea perfectly encapsulated through their development project for the Groues, a 70-hectare urban area adjacent to La Défense in Paris. The public development agency asked Güller how to make the city that surrounds this business hub perform

The importance of place-making Güller considers projects such as the Göteborg Bridge, Fribourg’s Cardinal Brewery and the Groues to be deep reflections on the challenge of making traffic flow and urban life co-exist in harmony. “We aim to create places of quality inside the city out of areas which are often considered as ‘nonplaces’ such as airports, bridges or railway stations,” he explains. “We consider what place they have in society so that they are