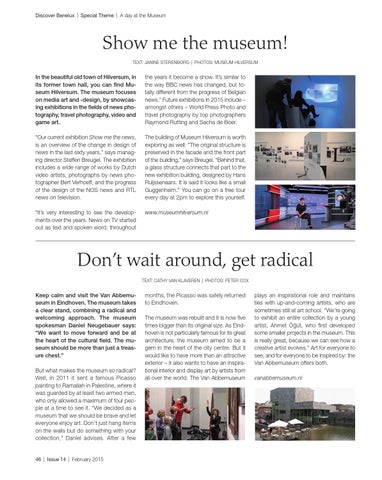 In the beautiful old town of Hilversum, in its former town hall, you can find Museum Hilversum. The museum focuses on media art and -design, by showcasing exhibitions in the fields of news photography, travel photography, video and game art.

the years it become a show. It’s similar to the way BBC news has changed, but totally different from the progress of Belgian news.” Future exhibitions in 2015 include – amongst others – World Press Photo and travel photography by top photographers Raymond Rutting and Sacha de Boer.

“Our current exhibition Show me the news, is an overview of the change in design of news in the last sixty years,” says managing director Steffen Breugel. The exhibition includes a wide range of works by Dutch video artists, photographs by news photographer Bert Verhoeff, and the progress of the design of the NOS news and RTL news on television.

The building of Museum Hilversum is worth exploring as well: “The original structure is preserved in the facade and the front part of the building,” says Breugel. “Behind that, a glass structure connects that part to the new exhibition building, designed by Hans Ruijssenaars. It is said it looks like a small Guggenheim.” You can go on a free tour every day at 2pm to explore this yourself.

“It’s very interesting to see the developments over the years. News on TV started out as text and spoken word, throughout

Keep calm and visit the Van Abbemuseum in Eindhoven. The museum takes a clear stand, combining a radical and welcoming approach. The museum spokesman Daniel Neugebauer says: “We want to move forward and be at the heart of the cultural field. The museum should be more than just a treasure chest.” But what makes the museum so radical? Well, in 2011 it sent a famous Picasso painting to Ramallah in Palestine, where it was guarded by at least two armed men, who only allowed a maximum of four people at a time to see it. “We decided as a museum that we should be brave and let everyone enjoy art. Don’t just hang items on the walls but do something with your collection,” Daniel advises. After a few

months, the Picasso was safely returned to Eindhoven. The museum was rebuilt and it is now five times bigger than its original size. As Eindhoven is not particularly famous for its great architecture, the museum aimed to be a gem in the heart of the city centre. But it would like to have more than an attractive exterior – it also wants to have an inspirational interior and display art by artists from all over the world. The Van Abbemuseum

plays an inspirational role and maintains ties with up-and-coming artists, who are sometimes still at art school. “We’re going to exhibit an entire collection by a young artist, Ahmet Ög˘üt, who first developed some smaller projects in the museum. This is really great, because we can see how a creative artist evolves.” Art for everyone to see, and for everyone to be inspired by: the Van Abbemuseum offers both. vanabbemuseum.nl