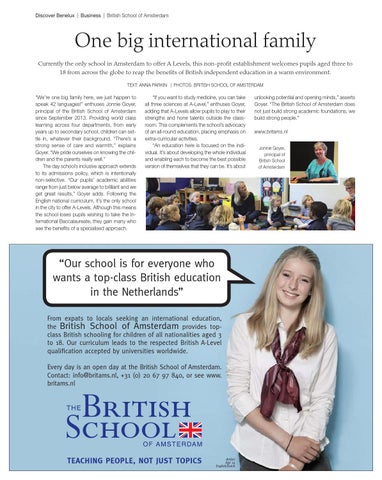 One big international family Currently the only school in Amsterdam to offer A Levels, this non-profit establishment welcomes pupils aged three to 18 from across the globe to reap the benefits of British independent education in a warm environment. TEXT: ANNA PARKIN   |  PHOTOS: BRITISH SCHOOL OF AMSTERDAM

“We’re one big family here, we just happen to speak 42 languages!” enthuses Jonnie Goyer, principal  of  the  British  School  of  Amsterdam since  September  2013.  Providing  world  class learning  across  four  departments,  from  early years up to secondary school, children can settle  in,  whatever  their  background.  “There’s  a strong  sense  of  care  and  warmth,”  explains Goyer. “We pride ourselves on knowing the children and the parents really well.” The day school’s inclusive approach extends to  its  admissions  policy,  which  is  intentionally non-selective.  “Our  pupils’  academic  abilities range from just below average to brilliant and we get  great  results,”  Goyer  adds.  Following  the English national curriculum, it’s the only school in the city to offer A-Levels. Although this means the school loses pupils wishing to take the International Baccalaureate, they gain many who see the benefits of a specialised approach.

“If you want to study medicine, you can take all three sciences at A-Level,” enthuses Goyer, adding that A-Levels allow pupils to play to their strengths  and  hone  talents  outside  the  classroom. This complements the school’s advocacy of an all-round education, placing emphasis on extra-curricular activities. “An education here is focused on the individual. It’s about developing the whole individual and enabling each to become the best possible version of themselves that they can be. It’s about

“Our school is for everyone who wants a top-class British education in the Netherlands” From expats to locals seeking an international education, the British School of Amsterdam provides topclass British schooling for children of all nationalities aged 3 to 18. Our curriculum leads to the respected British A-Level qualification accepted by universities worldwide. Every day is an open day at the British School of Amsterdam. Contact: info@britams.nl, +31 (0) 20 67 97 840, or see www. britams.nl