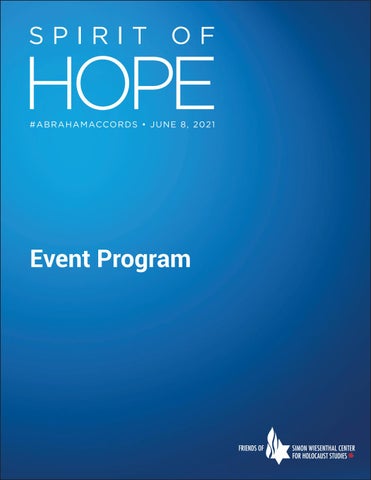 Opening remarks Fred Waks Chairman of the FSWC Board of Directors

Our Community Impact A Video Presentation

Legacy of Hope A Video Presentation

His Excellency Yousef Al Otaiba has been Ambassador of the United Arab Emirates to the United States of America since July 2008. In this role, he’s focused on enhancing strategic cooperation in security and counterterrorism, economic development, the arts and culture and charity. A long-time advocate for Middle East peace, his op-ed published in Yedioth Ahronoth, was key to establishing the Abraham Accords and landed him on TIME’s ‘100 Most Influential People’ list. He currently sits on the Leadership Council for the Harvard Kennedy School, the Board of Trustees for the American University in Cairo and the Board of Directors of the Special Olympics. He previously served as the Director of International Affairs for the Crown Prince of Abu Dhabi, and Deputy Supreme Commander of the UAE Armed Forces, His Highness General Sheikh Mohamed bin Zayed Al Nahyan. In recognition of his dedicated service to the UAE and the US, he was promoted to Minister of State in 2017.

Lesley Stahl is one of A recognized and experi journalists. She was hir 1972, entering a male-d and she broke through for herself. She has be correspondent since M series on Guantanamo gained unprecedented facilities, was honored Murrow award in 2014 she won two Emmys, h for the Guantanamo se an eye-opening story a real estate bubble. Am achievements is the Li Emmy she was awarde excellence in reporting York Times best-selling Grandma: The Joys an Grandparenting, releas

as Israel’s Minister of Foreign Affairs in May 2020. Since 2019 he has been a Member of the Knesset representing the “Blue and White” Party. Lt. Gen. (res.) Ashkenazi served as the 19th Chief-of-Staff of the Israel Defense Forces between February 2007 and February 2011, following a long and distinguished career in the IDF.Ashkenazi served in numerous senior capacities in the IDF including Deputy Chief-of-Staff, and head of the Northern Command. In addition, he served as Director-General of the Ministry of Defense. After taking a number of years away from the military to work in the private sector, in early 2007, Ashkenazi reenlisted in the IDF following his appointment as Chief-of-Staff. During his tenure, Ashkenazi restored the IDF’s operative capacity in the wake of the Second Lebanon War and led the IDF through a series of campaigns, including “Operation Hot Winter,” and “Operation Cast Lead”, as well as the decisive strike on Syria’s nuclear reactor in September 2007. In 2012 Ashkenazi was appointed, in a voluntary capacity, as chairman of one of Israel’s leading non-profits, the Rashi Foundation. The Rashi Foundation works to foster education and welfare solutions that enable upward mobility for young people in Israel’s social and geographic periphery.

America’s most ienced broadcast red by CBS News in dominated industry, h and made a name een a 60 Minutes March 1991. Her 2013 o Bay, in which she d access to its prison d with an Edward R. 4. In the same year, her 10th and 11th, one eries and another for about China’s huge mong Stahl’s crowning ifetime Achievement ed in 2003 for g. She is also the New g author of Becoming nd Science of the New sed in April 2016.

H. E. Dr. Shaikh Khalid Bin Khalifa Al-Khalifa Member of the Bahraini Royal family Dr. Shaikh Khalid bin Khalifa bin Daij Al Khalifa is the Vice-Chairman of the Board of Trustees and Executive Director of Isa Cultural Centre and the Chairman of the Board of Trustees of King Hamad Global Centre for Peaceful Coexistence in the Kingdom of Bahrain. He has also served on the Shura Council, where he was elected, during the 2002-2006 and 2010-2014 legislative sessions, as the Head of the Foreign Affairs, Defense and National Security Committee.Dr Shaikh Khalid has published several studies and academic research in history, as well as analytical articles in politics, international relations, unity, Arab nationalism, peace, tolerance and coexistence around the globe. He is currently a member of the International Academic Affairs Committee at the University of Oxford, UK, member of Board of Directors of Education and Training Quality Assurance Authority of Bahrain, member of the Bahrain National Committee of Education, Science and Culture. He is also a member of Board of Trustees of the Arab Thought Forum, appointed by HRH Prince Al Hassan Bin Talal of Jordan, and he is the Vice-Chairman of the Board of Trustees of the “Coalition of Arab Thought Centres”. In recognition of his efforts for promoting the concept of “Cultural Diplomacy” and the spread of peace, Shaikh Khalid received the Mediterranean Prize for Culture and Peace for 2018 in Italy.

Sec. Mike Pompeo Former U.S. Secretary of State and Director of the CIA Mike Pompeo is the first American to have served in the Cabinet posts of Secretary of State and Director of the Central Intelligence Agency. From serving in uniform as a young Army officer on freedom’s frontier on the communist boundary of the Iron Curtain, to spending days on manufacturing floors with hard working machinists making American products for the companies he led, to sitting in the White House Situation room at critical moments - Mike has collected worldwide relationships, unique memories, real achievements and powerful stories of the great Americans he has worked alongside. Serving as our nation’s most senior diplomat in his role as 70th United State Secretary of State, the world witnessed the emergence of America as a massive energy exporter, a force for good in Middle East with real peace cemented in the historic Abraham Accords and an American foreign policy based on our nation’s founding ideals that put America first.

A Message from the President & CEO of FSWC

Good evening, On behalf of our entire organization, it is an honour for me to welcome you to Friends of Simon Wiesenthal Center’s Spirit of Hope 2021. We have a wonderful program for this evening’s event which we are confident will prove both enlightening and thought provoking for our many friends and supporters in attendance. The past year has been challenging for everyone on so many levels, but with your support and generosity we have emerged stronger and more resilient than ever. Through ongoing partnerships, educational initiatives and advocacy work, we have been able to intensify our work, reaching more and more Canadians, at a time when the fight against antisemitism, racism and hate is more critical than ever. In these challenging times, we pledge to you that FSWC will be front and centre center wherever the scourge of Jew-hatred raises its ugly head. At Friends of Simon Wiesenthal Center, the tragic lessons of the past motivate us to stand on the front line to combat antisemitism, racism and intolerance wherever they persist. Our goals are achieved through diverse programs designed to make our community, our province, our country, and our world a more inclusive and tolerant place. Tonight, we wish to acknowledge every donor, leader and member of the Friends of Simon Wiesenthal Center team for their dedication to our collective mission. We deeply appreciate your continued support. Wishing you an engaging Spirit of Hope evening and an enjoyable, fulfilling and healthy summer. Michael Levitt President and CEO

A Message from the Chairman of the Board, FSWC

Welcome to Spirit of Hope 2021! I am pleased to report that our organization continues to stand tall in the struggle against antisemitism and intolerance, thanks to your generous support. This was an especially difficult year, as we have seen the frequency of hate-motivated crimes rise across the country, with the Jewish community once again identified as the most targeted group. It is more important than ever that we support Friends of Simon Wiesenthal Center so it can continue to expand its successful programs which bring people together and counter hate and intolerance. Tonight’s program will feature a dynamic conversation in celebration of the Abraham Accords and global affairs with a panel of distinguished individuals, the Former U.S. Secretary of State, Mike Pompeo, His Excellency Dr. Shaikh Khalid Bin Khalifa, Member of the Bahraini Royal family, Lt. Gen. (res.) Gabi Ashkenazi, Israeli Minister of Foreign Affairs. The conversation will be facilitated Legendary Broadcast Journalist & Co-Editor of 60 Minutes, Lelsey Stahl. Joined by these eminent leaders, I am certain this event will stand out as an evening to remember. I would like to thank our 2021 Spirit of Hope Co-Chairs, Sharon and Ron Baruch and Daryl and Derek Erdman, for their dedication to our community, education and human rights. Thank you all for your generous support. With best wishes for a wonderful evening, Fred Waks Chairman of the Board, FSWC

A Message from the Co-Chairs of 2021 Spirit of Hope

Ron and Sharon Baruch, and Derek and Daryl Erdman 2021 Spirit of Hope Co-Chairs

Good evening, Tonight we gather virtually in support of Friends of Simon Wiesenthal Center – an organization committed to countering racism and antisemitism and to promoting the principles of tolerance, social justice and Canadian democratic values through advocacy and education. We have all had the honour of being involved with FSWC for a number of years; drawn to the organization because of its vast educational initiatives offered both in the city of Toronto and travelling programs across Canada. We have seen first-hand the incredible work of FSWC. We travelled to Israel and participated on Compassion2Action and saw the great work FSWC is doing with educators, law enforcement and politicians. We have also worked on events like Freedom Day, and are involved in a private school outreach program in collaboration with FSWC’s outstanding team of educators. We are thrilled to help this worthy organization. While the rest of us may grow weary or discouraged by the state of the world today, FSWC remains on the frontline in the fight against antisemitism and social injustice by engaging youth near and far with robust virtual programming and the award winning Tour for Humanity bus. Thank you for being here with us tonight and supporting the critical work of the Friends of Simon Wiesenthal Center. Your involvement helps us work toward a more peaceful, compassionate and tolerant future. Ron and Sharon Baruch, and Derek and Daryl Erdman 2021 Spirit of Hope Co-Chairs

Hear from our 2021 Spirit of Hope Co-Chairs on how your generous support makes a difference.

A Message from the Prime Minister of Canada

A Message from the Premier of Ontario

A Message from the Mayor of Toronto

A special thank you to our Supporters

About Friends of Simon Wiesenthal Center for Holocaust Studies

Friends of Simon Wiesenthal Center for Holocaust Studies (FSWC) is a leading Canadian non-profit human rights organization directly representing over 30,000 members. FSWC is committed to Holocaust education, to countering antisemitism, promoting freedom, democracy and human rights for all, and to pushing the limits to achieving humanity’s best. FSWC is affiliated with the Simon Wiesenthal Center, an international Jewish human rights organization headquartered in Los Angeles, which has won two Academy Awards, has built two Museums of Tolerance (with a third being built in Jerusalem) and is an NGO at the United Nations, UNESCO, OAS, OSCE, the Council of Europe and the Latin American Parliament.

Donate Now and Join us in Making a Difference friendsofsimonwiesenthalcenter.com/donate Call 1-866-864-9735 Or scan this QR code for direct access

This is how Friends of Simon Wiesenthal Center is making a difference: • 170,000 students, teachers and community members educated through Tour for Humanity, our award-winning mobile classroom. • 57,000 Freedom Day youth participants inspired to be change makers in their communities since 2010. • 6,000 students participated in 200+ virtual diversity workshops this year. • 1,500 speeches on inclusion, respect, and education submitted by students for Speaker’s Idol. • 145 Canadian law enforcers, parliamentarians, mayors and community leaders have travelled to Poland and Israel on the Compassion to Action Holocaust education journey.

Join us in making a difference. Visit us at fswc.ca