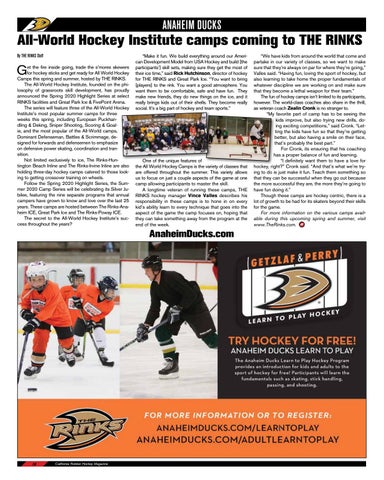 et the fire inside going, trade the s’mores skewers for hockey sticks and get ready for All World Hockey Camps this spring and summer, hosted by THE RINKS. The All-World Hockey Institute, founded on the philosophy of grassroots skill development, has proudly announced the Spring 2020 Highlight Series at select RINKS facilities and Great Park Ice &amp; FivePoint Arena. The series will feature three of the All-World Hockey Institute’s most popular summer camps for three weeks this spring, including European Puckhandling &amp; Deking, Sniper Shooting, Scoring &amp; Goalie, and the most popular of the All-World camps, Dominant Defenseman, Battles &amp; Scrimmage, designed for forwards and defensemen to emphasize on defensive power skating, coordination and transition. Not limited exclusively to ice, The Rinks-Huntington Beach Inline and The Rinks-Irvine Inline are also holding three-day hockey camps catered to those looking to getting crossover training on wheels. Follow the Spring 2020 Highlight Series, the Summer 2020 Camp Series will be celebrating its Silver Jubilee, featuring the nine separate programs that annual campers have grown to know and love over the last 25 years. These camps are hosted between The Rinks-Anaheim ICE, Great Park Ice and The Rinks-Poway ICE. The secret to the All-World Hockey Institute’s success throughout the years?

“Make it fun. We build everything around our American Development Model from USA Hockey and build [the participants’] skill sets, making sure they get the most of their ice time,” said Rick Hutchinson, director of hockey for THE RINKS and Great Park Ice. “You want to bring [players] to the rink. You want a good atmosphere. You want them to be comfortable, safe and have fun. They make new friends, they do new things on the ice, and it really brings kids out of their shells. They become really social. It’s a big part of hockey and team sports.”

One of the unique features of the All World Hockey Camps is the variety of classes that are offered throughout the summer. This variety allows us to focus on just a couple aspects of the game at one camp allowing participants to master the skill. A longtime veteran of running these camps, THE RINKS hockey manager Vince Valles describes his responsibility in these camps is to hone in on every kid’s ability learn to every technique that goes into the aspect of the game the camp focuses on, hoping that they can take something away from the program at the end of the week.

“We have kids from around the world that come and partake in our variety of classes, so we want to make sure that they’re always on par for where they’re going,” Valles said. “Having fun, loving the sport of hockey, but also learning to take home the proper fundamentals of whatever discipline we are working on and make sure that they become a lethal weapon for their team.” The fun of hockey camps isn’t limited to its participants, however. The world-class coaches also share in the thrill, as veteran coach Zealin Cronk is no stranger to. “My favorite part of camp has to be seeing the kids improve, but also trying new drills, doing exciting competitions,” said Cronk. “Letting the kids have fun so that they’re getting better, but also having a smile on their face, that’s probably the best part.” For Cronk, its ensuring that his coaching has a proper balance of fun and learning. “I definitely want them to have a love for hockey, right?” Cronk said. “And that’s what we’re trying to do is just make it fun. Teach them something so that they can be successful when they go out because the more successful they are, the more they’re going to have fun doing it.” Though these camps are hockey centric, there is a lot of growth to be had for its skaters beyond their skills for the game. For more information on the various camps available during this upcoming spring and summer, visit www.TheRinks.com.