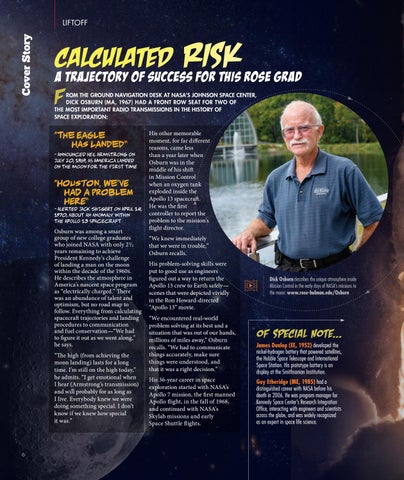 A Trajectory Of Success For This Rose Grad

ROM THE GROUND NAVIGATION DESK AT NASA’S JOHNSON SPACE CENTER, DICK OSBURN (MA, 1967) HAD A FRONT ROW SEAT FOR TWO OF THE MOST IMPORTANT RADIO TRANSMISSIONS IN THE HISTORY OF SPACE EXPLORATION:

“The Eagle Has Landed” - Announced Neil Armstrong on July 20, 1969, as America landed on the moon for the FIrst time

“Houston, We’VE HaD a Problem HERE”

- Alerted JACK SWIGERT on April 14, 1970, about an anomaly within the Apollo 13 spacecraft

Osburn was among a smart group of new college graduates who joined NASA with only 2 1/2 years remaining to achieve President Kennedy’s challenge of landing a man on the moon within the decade of the 1960s. He describes the atmosphere in America’s nascent space program as “electrically charged.” There was an abundance of talent and optimism, but no road map to follow. Everything from calculating spacecraft trajectories and landing procedures to communication and fuel conservation—“We had to figure it out as we went along,” he says. “The high (from achieving the moon landing) lasts for a long time. I’m still on the high today,” he admits. “I get emotional when I hear (Armstrong’s transmission) and will probably for as long as I live. Everybody knew we were doing something special. I don’t know if we knew how special it was.”

His other memorable moment, for far different reasons, came less than a year later when Osburn was in the middle of his shift in Mission Control when an oxygen tank exploded inside the Apollo 13 spacecraft. He was the first controller to report the problem to the mission’s flight director. “We knew immediately that we were in trouble,” Osburn recalls. His problem-solving skills were put to good use as engineers figured out a way to return the Apollo 13 crew to Earth safely— scenes that were depicted vividly in the Ron Howard-directed “Apollo 13” movie. “We encountered real-world problem solving at its best and a situation that was out of our hands, millions of miles away,” Osburn recalls. “We had to communicate things accurately, make sure things were understood, and that it was a right decision.” His 36-year career in space exploration started with NASA’s Apollo 7 mission, the first manned Apollo flight, in the fall of 1968, and continued with NASA’s Skylab missions and early Space Shuttle flights.

Dick Osburn describes the unique atmosphere inside Mission Control in the early days of NASA’s missions to the moon: www.rose-hulman.edu/Osburn

OF SPECIAL NOTE... James Dunlop (EE, 1952) developed the nickel-hydrogen battery that powered satellites, the Hubble Space Telescope and International Space Station. His prototype battery is on display at the Smithsonian Institution. Guy Etheridge (ME, 1985) had a distinguished career with NASA before his death in 2006. He was program manager for Kennedy Space Center’s Research Integration Office, interacting with engineers and scientists across the globe, and was widely recognized as an expert in space life science. 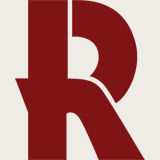