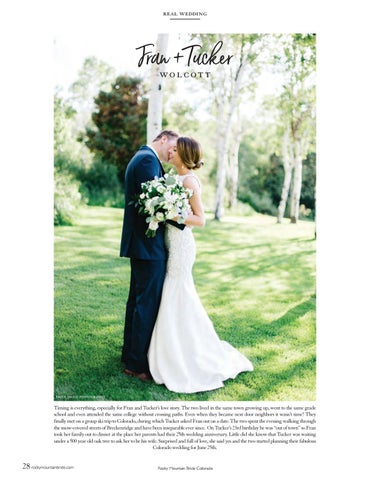 Timing is everything, especially for Fran and Tucker’s love story. The two lived in the same town growing up, went to the same grade school and even attended the same college without crossing paths. Even when they became next door neighbors it wasn’t time! They finally met on a group ski trip to Colorado, during which Tucker asked Fran out on a date. The two spent the evening walking through the snow-covered streets of Breckenridge and have been inseparable ever since. On Tucker’s 23rd birthday he was “out of town” so Fran took her family out to dinner at the place her parents had their 25th wedding anniversary. Little did she know that Tucker was waiting under a 500 year old oak tree to ask her to be his wife. Surprised and full of love, she said yes and the two started planning their fabulous Colorado wedding for June 25th.

The Bride's Planning Guide to a perfect Rocky Mountain wedding in Colorado!

The Bride's Planning Guide to a perfect Rocky Mountain wedding in Colorado!