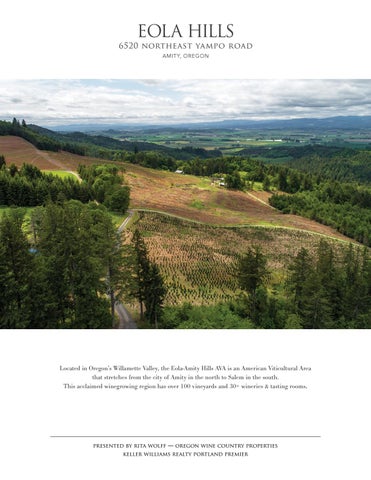 Located in Oregonâ&#x20AC;&#x2122;s Willamette Valley, the Eola-Amity Hills AVA is an American Viticultural Area that stretches from the city of Amity in the north to Salem in the south. This acclaimed winegrowing region has over 100 vineyards and 30+ wineries & tasting rooms.

A unique opportunity to invest before prices go up in the award winning, sought after Eola-Amity Hills AVA. Enjoy quiet, secluded country living on 40 acres, in a thoughtfully updated 1910 farmhouse surrounded by oak trees. Large outbuildings and a studio provide ample opportunity to build the vineyard of your dreams. Youâ&#x20AC;&#x2122;ll be in great companyâ&#x20AC;&#x201D; just one mile from Evening Land Vineyards and the Linqua Franca Winery, and three miles from Brooks Winery.

GROSS PLANTABLE VINEYARD ACRES: 24.0 (approximate) NET PLANTABLE VINEYARD ACRES: Dependent upon vineyard layout, avenue width and degree of maximization. Typically 80-90% of gross plantable vineyard acres. AVA (AMERICAN VITICULTURAL AREA): Eola Hills VINEYARD SOIL TYPES PRESENT (NRCS SOIL SURVEY): Primarily Jory and Nekia with minor areas of Helmick, Steiwer, Bellpine, Helmick and Ritner. The Eola Hills AVA is directly associated with Jory and Nekia soils, both of which are very well proven vineyard soils. Other soils listed are classified as vineyard soils as well, but should be noted that irrigation may be required in areas of Ritner as they tend to be rocky with lower water holding capacity. Most of the Ritner on this property is located on steep sections of land which may not be as suitable for planting. Note: It is recommended that an independent soil survey be performed to better define soil type transitions. SLOPE/ASPECT: The main aspect is west to slight northwest, which takes advantage of warmer, more intense afternoon sun exposure. Slope ranges between approximately 10-30% on most slopes, all of which is “farmable”. Given that vineyard tractor work begins in the spring, a crawler tractor is advised for general farming for added tractions and stability. DRAINAGE: Jory and Nekia soils have good natural drainage characteristics. Its not likely that drainage will be needed within these areas, but in soil transitions where well drained soils change to those with higher clay content such as Helmick, Steiwer, Bellpine. ELEVATION: 700’ to 1,000’ above sea level appears to be the elevation range for this particular parcel. The northwest corner below the road represents the low elevation mark for this property and the upper reaches on the eastern edge delineate the higher elevation. MICROCLIMATE: The property is located near other proven vineyard operations, which bodes well for the site’s potential to produce high quality wine grapes. Although specific weather data for this site is not available, it is reasonable to assume that this site will have the potential to adequately ripen cool climate grape varieties such as Pinot Noir, Chardonnay, Pinot Gris or similar, under proper management. It is recommended that either a weather station or temperature recording thermometers be used in the lower reaches of the property to record temperatures mainly between the months of April 1st and October 31st to determine if freezing temperatures are realized during the growing season. “FARMABILITY”: The general lay of the property lends itself to fairly uniform vineyard block formation with most rows running east-west, which is recommended for tractor safety and efficiency. IRRIGATION: Although drip irrigation can help reduce variability in a vineyard’s establishment period, can help reduce vine stress in drought years and serve as an alternative means for applying fertilizer to vines; drip irrigation will likely not be a requirement for vine establishment. However a full irrigation system or supplemental hand watering may be useful during the establishment period for vines planted in the Ritner soil. SUMMARY: This is a very nice parcel in an up and coming, high quality viticultural area. A good portion of the land has been cleared and is well on its way to being ready for vineyard ground preparation. The steeper slopes may not be as efficient to farm as those on the valley floor or foothills slopes, but do offer very nice aspects for late season ripening. Higher elevations (>800’) are becoming more popular with winemakers seeking higher acids, lower sugars and terroir driven flavors achieved with longer growing seasons.

Licensed in the State of Oregon. Each office is independently owned and operated.