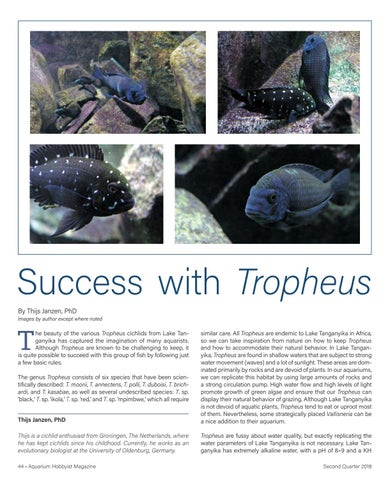 Success with Tropheus By Thijs Janzen, PhD Images by author except where noted

similar care. All Tropheus are endemic to Lake Tanganyika in Africa, so we can take inspiration from nature on how to keep Tropheus and how to accommodate their natural behavior. In Lake Tanganyika, Tropheus are found in shallow waters that are subject to strong water movement (waves) and a lot of sunlight. These areas are dominated primarily by rocks and are devoid of plants. In our aquariums, we can replicate this habitat by using large amounts of rocks and a strong circulation pump. High water flow and high levels of light promote growth of green algae and ensure that our Tropheus can display their natural behavior of grazing. Although Lake Tanganyika is not devoid of aquatic plants, Tropheus tend to eat or uproot most of them. Nevertheless, some strategically placed Vallisneria can be a nice addition to their aquarium.

Thijs is a cichlid enthusiast from Groningen, The Netherlands, where he has kept cichlids since his childhood. Currently, he works as an evolutionary biologist at the University of Oldenburg, Germany.

Tropheus are fussy about water quality, but exactly replicating the water parameters of Lake Tanganyika is not necessary. Lake Tanganyika has extremely alkaline water, with a pH of 8–9 and a KH

he beauty of the various Tropheus cichlids from Lake Tanganyika has captured the imagination of many aquarists. Although Tropheus are known to be challenging to keep, it is quite possible to succeed with this group of fish by following just a few basic rules.