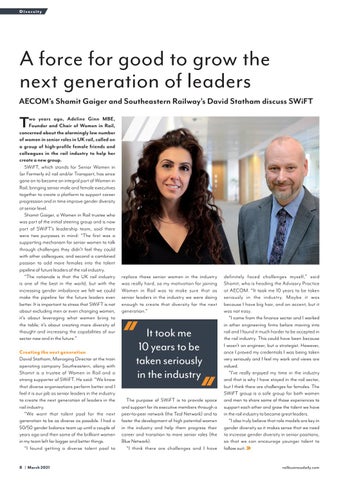 wo years ago, Adeline Ginn MBE, Founder and Chair of Women in Rail, concerned about the alarmingly low number of women in senior roles in UK rail, called on a group of high-profile female friends and colleagues in the rail industry to help her create a new group. SWiFT, which stands for Senior Women in (or Formerly in) rail and/or Transport, has since gone on to become an integral part of Women in Rail, bringing senior male and female executives together to create a platform to support career progression and in time improve gender diversity at senior level. Shamit Gaiger, a Women in Rail trustee who was part of the initial steering group and is now part of SWiFT’s leadership team, said there were two purposes in mind: “The first was a supporting mechanism for senior women to talk through challenges they didn’t feel they could with other colleagues; and second a combined passion to add more females into the talent pipeline of future leaders of the rail industry. “The rationale is that the UK rail industry is one of the best in the world, but with the increasing gender imbalance we felt we could make the pipeline for the future leaders even better. It is important to stress that SWiFT is not about excluding men or even changing women, it’s about leveraging what women bring to the table; it’s about creating more diversity of thought and increasing the capabilities of our sector now and in the future.” Creating the next generation David Statham, Managing Director at the train operating company Southeastern, along with Shamit is a trustee of Women in Rail and a strong supporter of SWiFT. He said: “We know that diverse organisations perform better and I feel it is our job as senior leaders in the industry to create the next generation of leaders in the rail industry. “We want that talent pool for the next generation to be as diverse as possible. I had a 50/50 gender balance team up until a couple of years ago and then some of the brilliant women in my team left for bigger and better things. “I found getting a diverse talent pool to 8 | March 2021

replace those senior women in the industry was really hard, so my motivation for joining Women in Rail was to make sure that as senior leaders in the industry we were doing enough to create that diversity for the next generation.”

It took me 10 years to be taken seriously in the industry The purpose of SWiFT is to provide space and support for its executive members through a peer-to-peer network (the Teal Network) and to foster the development of high potential women in the industry and help them progress their career and transition to more senior roles (the Blue Network). “I think there are challenges and I have

definitely faced challenges myself,” said Shamit, who is heading the Advisory Practice at AECOM. “It took me 10 years to be taken seriously in the industry. Maybe it was because I have big hair, and an accent, but it was not easy. “I came from the finance sector and I worked in other engineering firms before moving into rail and I found it much harder to be accepted in the rail industry. This could have been because I wasn’t an engineer, but a strategist. However, once I proved my credentials I was being taken very seriously and I feel my work and views are valued. “I’ve really enjoyed my time in the industry and that is why I have stayed in the rail sector, but I think there are challenges for females. The SWiFT group is a safe group for both women and men to share some of those experiences to support each other and grow the talent we have in the rail industry to become great leaders. “I also truly believe that role models are key in gender diversity so it makes sense that we need to increase gender diversity in senior positions, so that we can encourage younger talent to follow suit. railbusinessdaily.com 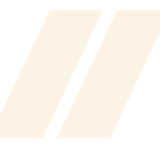