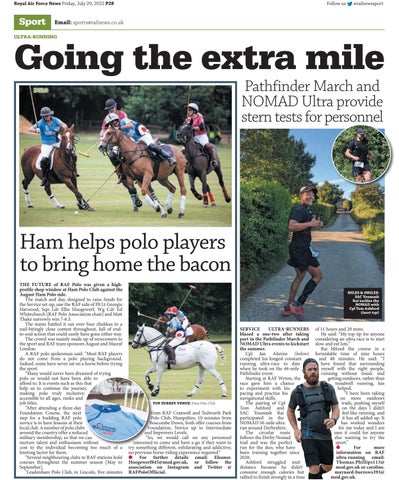 Ham helps polo players to bring home the bacon THE FUTURE of RAF Polo was given a highprofile shop window at Ham Polo Club against the August Ham Polo side. The match and day, designed to raise funds for the Service set-up, saw the RAF side of Flt Lt Georgie Harwood, Sqn Ldr Ellie Hoogewerf, Wg Cdr Ed Whitechurch (RAF Polo Association chair) and Matt Thake narrowly win 7-6.5. The teams battled it out over four chukkas in a nail-bitingly close contest throughout, full of endto-end action that could easily have gone either way. The crowd was mainly made up of newcomers to the sport and RAF team sponsors August and Masraf London. A RAF polo spokesman said: “Most RAF players do not come from a polo playing background. Indeed, some have never sat on a horse before trying the sport. “Many would never have dreamed of trying polo or would not have been able to afford to. It is events such as this that help us to continue the journey, making polo truly inclusive; accessible to all ages, ranks and job titles. “After attending a three-day Foundation Course, the next step for a budding RAF polo novice is to have lessons at their local club. A number of polo clubs around the country offer a reduced military membership, so that we can nurture talent and enthusiasm without cost to the individual becoming too much of a limiting factor for them. “Several neighbouring clubs to RAF stations hold courses throughout the summer season [May to September]. &quot;Leadenham Polo Club, in Lincoln, five minutes

from RAF Cranwell and Tedworth Park Polo Club, Hampshire, 10 minutes from Boscombe Down, both offer courses from Foundation, Novice up to Intermediate and Improvers Levels. “So, we would call on any personnel interested to come and have a go if they want to try something different, exhilarating and addictive; no previous horse-riding experience required.” l For further details email: Eleanor. Hoogewerf845@mod.gov.uk, or follow the association on Instagram and Twitter @ RAFPoloOffiicial.

SERVICE ULTRA-RUNNERS blazed a one-two after taking part in the Pathfinder March and NOMAD Ultra events to kickstart the summer. Cpl Ian Aherne (below) completed his longest constant running ultra-race to date when he took on the 46-mile Pathfinder event. Starting at RAF Wyton, the race gave him a chance to experiment with his pacing and practise his navigational skills. The pairing of Cpl Tom Ashford and SAC Youmash Rai participated in the NOMAD 50-mile ultra run around Derbyshire. The circular route follows the Derby Nomad trail and was the perfect run for the duo, who have been training together since 2020. Ashford struggled middistance because he didn’t consume enough calories but rallied to finish strongly in a time

of 11 hours and 20 mins. He said: “My top tip for anyone considering an ultra race is to start slow and eat lots.” Rai blitzed the course in a formidable time of nine hours and 48 minutes. He said: “I have found that surrounding myself with the right people, running without music and getting outdoors, rather than treadmill running, has helped. “I have been taking on more outdoors trails, pushing myself on the days I didn’t feel like running, and it has all added up. It has worked wonders for me today and I am sure it could for anyone else wanting to try the sport.” l For more information on RAF ultra-running email: Thomas.Phillips113@ mod.gov.uk or caroline. maynard-burrows393@ mod.gov.uk.