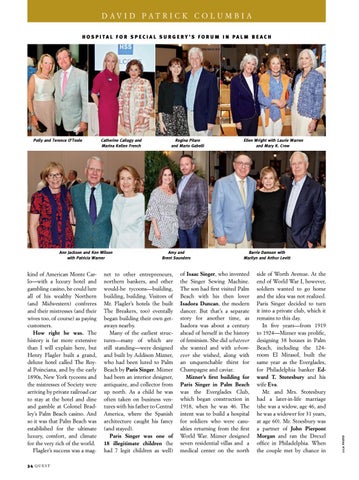 kind of American Monte Carlo—with a luxury hotel and gambling casino, he could lure all of his wealthy Northern (and Midwestern) confreres and their mistresses (and their wives too, of course) as paying customers. How right he was. The history is far more extensive than I will explain here, but Henry Flagler built a grand, deluxe hotel called The Royal Poinciana, and by the early 1890s, New York tycoons and the mistresses of Society were arriving by private railroad car to stay at the hotel and dine and gamble at Colonel Bradley’s Palm Beach casino. And so it was that Palm Beach was established for the ultimate luxury, comfort, and climate for the very rich of the world. Flagler’s success was a mag34 QUEST

net to other entrepreneurs, northern bankers, and other would-be tycoons—building, building, building. Visitors of Mr. Flagler’s hotels (he built The Breakers, too) eventally began building their own getaways nearby. Many of the earliest structures—many of which are still standing—were designed and built by Addison Mizner, who had been lured to Palm Beach by Paris Singer. Mizner had been an interior designer, antiquaire, and collector from up north. As a child he was often taken on business ventures with his father to Central America, where the Spanish architecture caught his fancy (and stayed). Paris Singer was one of 18 illegitimate children (he had 7 legit children as well)

of Isaac Singer, who invented the Singer Sewing Machine. The son had first visited Palm Beach with his then lover Isadora Duncan, the modern dancer. But that’s a separate story for another time, as Isadora was about a century ahead of herself in the history of feminism. She did whatever she wanted and with whomever she wished, along with an unquenchable thirst for Champagne and caviar. Mizner’s first building for Paris Singer in Palm Beach was the Everglades Club, which began construction in 1918, when he was 46. The intent was to build a hospital for soldiers who were casualties returning from the first World War. Mizner designed seven residential villas and a medical center on the north

side of Worth Avenue. At the end of World War I, however, soldiers wanted to go home and the idea was not realized. Paris Singer decided to turn it into a private club, which it remains to this day. In five years—from 1919 to 1924—Mizner was prolific, designing 38 houses in Palm Beach, including the 124room El Mirasol, built the same year as the Everglades, for Philadelphia banker Edward T. Stotesbury and his wife Eva. Mr. and Mrs. Stotesbury had a later-in-life marriage (she was a widow, age 46, and he was a widower for 31 years, at age 60). Mr. Stoesbury was a partner of John Pierpont Morgan and ran the Drexel office in Philadelphia. When the couple met by chance in